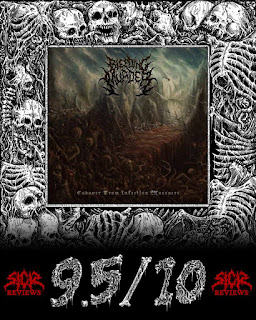 A circular bladed weapon of mass f***ing destruction has been created in the West Java in Indonesia and baptized with the name Bleeding Murder as a result of generating one of the largest massacres that this shitty world has ever known with a carnage f***ing piece of breathtaking insanity and unspeakable brutality! "Cadaver from Infection Massacre" is the name given to this devastating f***ing plague infecting our f***ing brains with an insane Brutal Death F***ing Metal being extremely fast, savage and ruthless with non-stop blast totally f***ing crazy but still knowing lighten our f***ing ears with some heavier f***ing parts! This deadly f***ing piece of shit contains 5 acts including 3 new recorded songs plus 2 old version songs and for this review I will focus on their three new tracks that are of a great brutal f***ing ingenuity and having a very high f***ing degree of insanity! Bleeding Murder is offering a material musically f***ing perfect with crazy f***ing riffs, drums completely insane and only including amazing eargasms from start to end and making us addicted very quickly because I probably listened to this EP 30 consecutive f***ing times before writing these lines! "Cadaver from Infection Massacre" has a total chaotic f***ing atmosphere that makes us feel the global extermination that is played, and of course, just increase the f***ing level of enjoyment of this disk perpetrating one of the greatest slaughter in the shitty history of extreme f***ing musick! The production is not perfect but f***ing great, mixing somewhat chaotic with guitar riffs sometimes a little hard to hear and the snare sometimes buried by the kick drums but making part of the general ambiance of this f***ing release and it really sounds like a massive destruction by crushing everything in its f***ing path and making us feel all those crunchy f***ing bones and skulls! Bleeding Murder consists of Ybro (Vocals), Ramadhan (Guitars), Iqbal (Bass), Gilbran (Drums) and the quartet are just f***ing brilliant at all f***ing levels! Ybro is giving a sick f***ing guttural that could be linear for some but for my part increasing the brutal shitty atmosphere of this insane f***ing shit, Ramadhan is only offering sick, catchy and addictive f***ing riffs giving a damn perfect songwriting, same goes for Iqbal on bass giving a huge performance helped by the brutal f***ing production and finally Gilbran is giving a total insane f***ing drumming offering infinite non stop blast and breaking the linearity with some heavy f***ing parts! A nearly perfect album by only having as tiny fault to include a mixing a bit chaotic but as I said above, it make part of the general murdering ambiance of this putrid f***ing shit! Bleeding Murder really managed their start with "Cadaver from Infection Massacre" which is undoubtedly a mandatory f***ing piece of mass f***ing destruction for the sickest people in the scene Brutal Death! Brilliant F***ing Carnage of Total Fucking Insanity! 9.5/10. [This review was first published by Andrew Sick of Sick Reviews and is used here with his kind permission.] 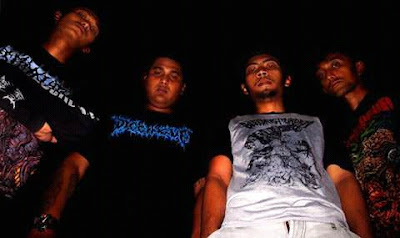 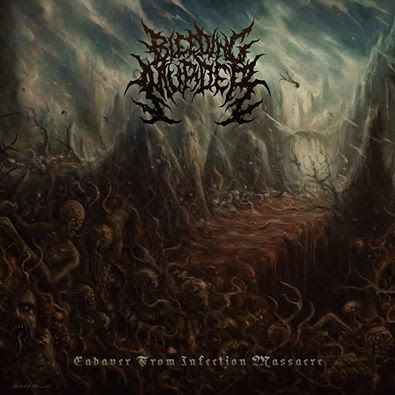