NEW TURBIDITY INTERVIEW (Teguh: "Turbidity is a role model for underground in Indonesia"), 14/5/2018. 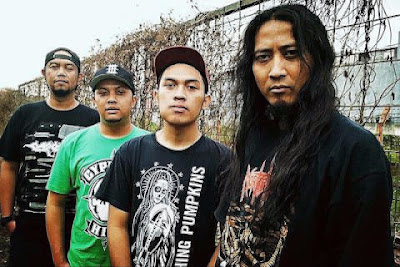 Teguh Prasetyo (Interfectorment band): My opinion is that Turbidity is one of the role models for underground music industry in Indonesia. They have reached the point where they do not need to follow someone else. They are at the point where they can make their own music. To me that inspiration is really great. They still do have the attitude of underground musicians.

Daniel Turbidity (guitarist): When Andri Gila was busy with his work, the band and Andri made a decision that Andri would resign. He was busy with his work and his family. The band felt confused about this situation. We had to move on with the band; we tried to find some good candidates for vocalist. Because Bobby did much tutoring with Turbidity (giving advice), and we all knew that Bobby was free and had no band, this is why we chose Bobby.

Popo Demons Damn: How did you feel about this?

Daniel: I feel that, after Bobby joined, he made Turbidity bigger than before. The band was more creative and the audience sometimes asks: “How can they mix Turbidity’s music with the character of Bobby’s vocals?” The audience knows that Bobby is a Brutal Death Metal [not slamming] vocalist from a brutal band [Bleeding Corpse].

KJ: Do you think more people are interested in Turbidity now?

KJ: What is your feeling about Bobby onstage with Turbidity?

Daniel: For the band, the other members, it is like we have more adrenaline and energy; we have more motivation because Bobby can connect with the audience and stir them up. The band’s decision is not wrong to replace Andri Gila.

KJ: What do you think about Andri joining Bleeding Corpse? 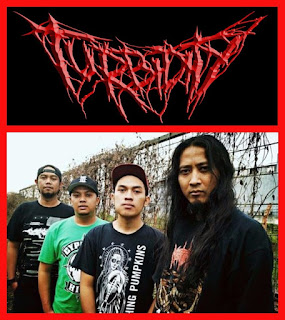 KJ: What is the plan for a new Turbidity album?

Daniel: We all make new songs.

Bob Rockiller (Turbidity vocalist): We are waiting for a good time to record. We hope soon that we will release the album.

Daniel: Bobby and I made all the new material.

KJ: How many songs have been written so far?

KJ: Do you know the record label?

Daniel: Groupies Merch. We released a promo demo last year. We released two songs as demo promo. Until now we still have not released the album.

Popo: Slam, but different to the old Turbidity album [Suffering of Human Decapitated]. I know because I heard the songs. Bobby pushed it to make it different for the new songs. It is still slam but more brutal for slamming.

Teguh: Still slamming but with a much more brutal approach to the music – less repetition; still fucking brutal.

Popo: The new songs are faster.

Teguh: More complicated patterns in the songs, but for me [it is] still easy listening.

Teguh: If we cut open his head we will find lots of underdog music dictionary.

KJ: Why did Mamay leave the band?

Daniel: He was busy with his work.

KJ: When did Mamay leave?

Popo: When will you get married? Uus Death and Kancil already married…

Daniel: Tomorrow if not the rain… [Indonesian saying]

Teguh: My opinion is that Turbidity is one of the role models for underground music industry in Indonesia. They have reached the point where they do not need to follow someone else. They are at the point where they can make their own music. To me that inspiration is really great. They still do have the attitude of underground musicians. As long as we have a good time together that’s all that matters. All the members of Turbidity are always reaching out to the younger generation, sharing their knowledge with us. It is very helpful to the younger bands to help us grow and get better.

KJ: Tell us about your idea for a Bandung Death Metal festival?

Popo: It is not only Daniel but Bobby and me; we feel that the new generation is very different to the old generation. They don’t want to make some gigs so as to keep the community alive. They are like a bad generation. We made so many gigs in the past and discussions to make a movement. Now they just stay in front of phones to chit-chat on social media instead of making gigs and a movement. 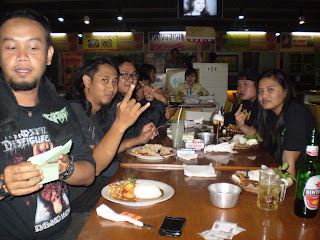 Teguh: I think the younger generation (including me) don’t understand the importance of making the scene alive through gigs. They think that, if they make the good music, people will pay them to play. The important thing about this type of music to me is building up a social community with friends who have the same interest. The young generation does not want to make gigs; they just want to play.

Popo: They want some people to pay them but they don’t know how to promote the band.

Teguh: For me, if I can play without payment at the gigs, it is fine. We have to make our own gigs. Death Metal is not for everyone.

Popo: If we are not invited to some gigs or some fests it is OK. We can make our own gigs. But their attitude [young generation’s attitude] is that they are waiting but no-one is calling. 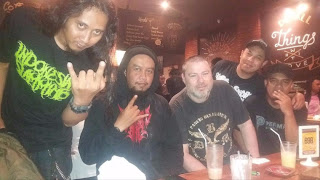 Teguh: To pay it is quite expensive for the organisers. The organisers only want the famous bands. Financially, I can understand [organisers’ preferences] but for the community it is bad. For the older people, even if they don’t play, they still stay within the community because of the sense of the family which they have. We will find a way again to make the old movement come alive again; it will take time because the mind-set of the new generation has changed. For us underground musicians, we will still stand.

KJ: How do you feel about modern-metal bands like Revenge the Fate rising up fast?

Teguh: We don't get jealous; they have their own different world, we have ours.

Teguh: What is most important to me is [that] I can see my idols play in Indonesia. We don’t need much exposure but when we get exposure it’s good for us.

Popo [asking Teguh]: If you are 35-years-old, like us, do you think you will feel we need regeneration?

Popo: In Bandung there is no new generation of women playing Death Metal in Bandung. We have Maya playing guitar; we have Girlzeroth in Cimahi; I must do something now to make a new generation.

Teguh: The hype is going down for now; the time is not right now. It is hard to make a female vocalist for Death Metal. 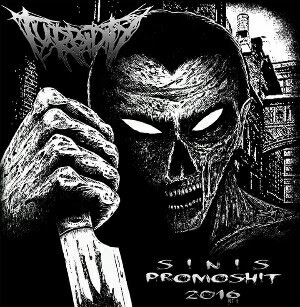 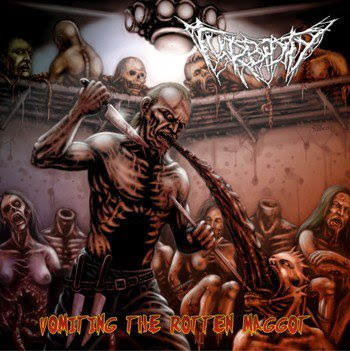 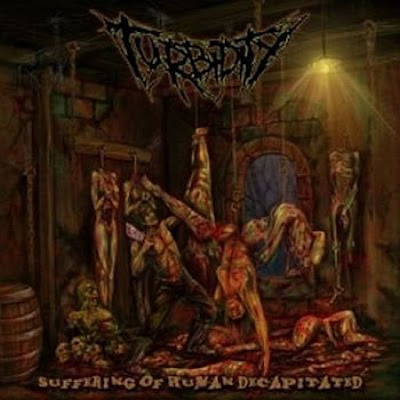