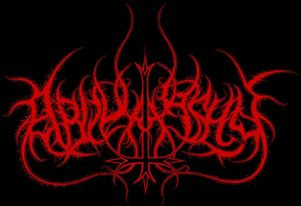 Kieran James 1 First can you please give us the history of the band and also does your band name have any meaning?

As much as I want to give the blackend biography ov ABVULABASHY, unfortunately it is quite a lengthy one so do read it up on Our bandpage for more detailed information.

2 How did you get to know Emptys band from Gresik, East Java, Indonesia and tell us a bit more about your split-album with Emptys and which songs you will include?

Hmmm...if I remember correctly, it was in 2006 when i'm interviewed by LUDAH Newsletter and the idea of the split also erupted at the same time. The thought just came out and i thought it be great to do a split with fellow Indonesian horde. Since im a mixed Javanese blood, it will further strengthen the bond even more between the 2 countries. This split consists of 7 hymns altogether. 4 from EMPTYS and 3 from ABVULABASHY.

The hymns from Us are as follows: 1. The Primordial Fire Ov The Goatyrant 2. The Abyss Where The Lurks The Twelve Winged... 3. Invoking The Ungods Ov Armageddon

3 What are the main lyrical themes of your music?

The lyrical theme have always been about anti christianity, blasphemy and war!

4 What are the future plans for the band?

5 What are the reasons it took you over 10 years to release your first full-length?

Finding the suitable line up for ABVULABASHY is always been the main issue. Most of the musicians that are suitable here either have thier own bands or doing sessions only. Another issue is the commitment. Some have what is takes to be in ABVULABASHY but don't have the right mentality and discipline. On the other hand, some have the qualities but thier skills is not up to standard and doesn't seemed to improve along the years. But most important of all, We must have mutual respect and understanding. Without it, its like working with a machine. So you see, its very hard for Us and We end up hiring sessionist for recording only. But for 2015, I'm glad that I've a few qualified ones so We shall from there.

6 Have you done any overseas tours? For example, have you toured Indonesia and Malaysia?

Yes, Ive toured in both countries and it was fucking great! We can't wait to tour there again and beyond asian region.

7 Where do you guys live in Singapore? (I lived there for four years so I know the place; I also have a Singapore Politics blog called Joo Chiat Road Online).

Oh, I didnt know you have a blog. I will make sure I will check it out. I lived in the eastern part of Singapore called Chai Chee. It is situated in Bedok. Since you lived there for 4 years, I'm pretty sure you know where it is.

8 How do you find living in Singapore inspires your music? Singapore is the opposite weather to Norway, the so-called home of second-wave BM. Singapore is an authoritarian state motivated by materialism and social status more than anything. Also you have growth in fundamentalism such as City Harvest Church and this is more associated with the elite social classes. Do these factors influence your music at all?

To be honest, nothing in Singapore actually inspires Me or influenced My music in any fucking way!

9 Have you got any favourite Indonesian BM bands? Recently we had a BM Special Issue with interviews with Sereignos, Warkvlt, Grim Infernus, Emptys, Durhaka, and Immortal Rites.

So far I have no favourite Indonesian Black Metal bands because the I hail all the bands that you mentioned above. They all fucking great and unique in their own fucking way! I'm proud to have contacted some of them and I hope to desecrate the same stage with them one day!

10 How is the Singapore scene going these days? Obviously Indonesia scene is way bigger these days. Can Singapore underground learn anything from Bandung or East Java scenes?

Personally, I feel that every underground scene can be big as those commercial scene without losing the essence of the underground. We can always learn from each other underground scene, not just asian region but also the s.american and european. I think the most important factor is respect. It will worthless if the scene lack respect to bands or metalheads.

11 I spent an evening with Hans Yamin in Singapore a while back. How is Hans doing and where is his shop located these days?

I've not met Hans for a very long time now and I'm not sure if his shop still around. Some told Me that it has closed down but I can't say for sure until I go there Myself.

12 Does NSBM still exist among the Malay community there and are there any of those bands we should avoid / seek out (depending on our ahem beliefs)?

In regards to NSBM, I don't give a fuck actually. Everyone is free to believe in what they want to. I'm not really sure if it still exist as I don't think I ever met any so far. But if they do, I will have no problem with these people as long as they don't step over line. As I said, respect is the most important things in ones life. 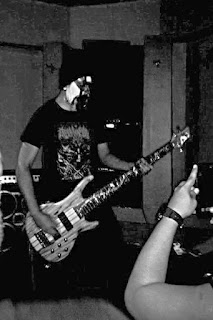 Band message to Kuching, Sarawak Event Organisers and supporters:
After 14 blackened years ov dormant, the Elite Christkrushers were summoned to destroy the weak and false in Kuching, Sarawak on the 30th August 2015, Malaysia.

Operation Borneo Metalism Spirit were a complete success with massacred bodies being trampled around!

We hail to those that have came down and supported Us in Our Tour ov Destruktion! 666 hails to Our fellow touring warbrothers ov death, Margyyah!


Last but not least, to Our new found Sarawakian komrades that renders assistance as much as they can and hospitality during Our short stay. You fucking rule! We will return, headhunters!! [29 September 2015]. 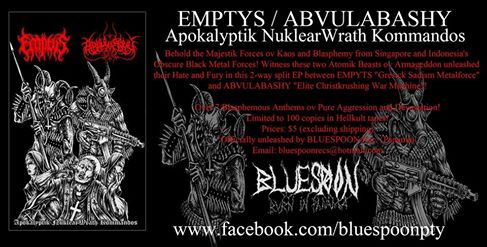