Jack Frost 1 First of all please tell me how you feel about Andrew Sick calling you the best guitarist in Bandung Death Metal?

Dedra: Hello Mr. Jack, thanks for your question. I see and observe many good guitar players in Bandung, not only the 'veterans' but also the newcomers are so good. I respect Mr. Andrew's opinion, it's a honor to me to be seen as a good guitar player by him.

2 Is it easy to balance playing in three bands and which band(s) to give your priority to? For example if all three bands had shows on same night in different cities who will you play for?

Dedra: Actually it's not easy to play in three bands, it takes more time and extra thought for me, if all bands have a show on same night at different cities, I will prefer playing with Digging Up, because we have made a commitment if this kind of case happens we will choose Digging Up as our first priority.

3 What is it like to work alongside Ferly and Luk in Kaluman?

Dedra: I'm really glad to be able to play with such great people like them. I even never think that I will be a guitar player for Kaluman, once I was wondering about becoming like them or playing with them, but now I'm joining Kaluman and the dream came true. We really never know what will come to us in the future.

4 Are you surprised by the huge success Kaluman has experienced in the last year or two?

Dedra: I have predicted the success of Kaluman before I became their member, because Kaluman is run by great people.

5 Do you think Kaluman’s success proves that even in BDM a great vocalist front-man such as Aries (who relates so well to the crowd) is needed to bring the band up to the top?

Dedra: For me it's really important, because the vocalist is the band 'spearhead' to interact with audience and make them feeling the groove when the band performs. Besides good sound quality a vocalist is expected to be able to reach the audience and bring them closer to us.

6 Also Dismemberment Torture has been a huge success and few would have predicted it after Dani was pushed out of JASAD in mid-2011. What do you think explains the success of DT? I was at the Disinfected / Motordeath split-album launch a few years back and I think DT was the best band playing that night by far.

Dedra: DT success was due to Dani (Papap) because he was an icon, and at that time people were feeling curious about Dani's new band (DT) after he was out from Jasad. Rumor and people's enthusiasm made people wait earnestly for DT. Besides Dani's great skill, he also is one of the people that made BDM local scene bigger (especially in Bandung). Without him, the Bandung scene movement might have grown slower, it's my opinion.

7 I heard the rumour Bleeding Corpse finds it hard to get gigs with the new vocalist Yadi Behom compared to in Bobby’s time. Do you think this is true? Or is it because Luk is putting his main effort into Kaluman now?

Dedra: I don't know about it, maybe they have some agreement on intern management. Luk-luk was a professional player, so I think it's impossible for him to be focused more on Kaluman than Bleeding Corpse. I think he will be doing the same like me, to make a commitment long before.

8 Some people, especially in East Java and Central Java, say Bandung scene is boring as 90% of the bands are BDM whereas in Surabaya there is a good mix of power, black, and death. Do you think this comment is fair?

Dedra: People's opinion is their right, I don't give a damn what people say, for me if you like it just listen, if you don't, just let it be.

9 Why did you select Teguh and the other guy from INTERFECTORMENT to join DIGGING UP? Have they made a good contribution so far?

Dedra: Well, before Teguh, I recruited Agung [drummer] first. At that time, Digging Up still used additional bassist, and before Teguh came, the last additional bassist said that he can no longer help Digging Up. Then Agung suggested to recruit Teguh as a bass player, it was more or less like that. So far, they gave a great contribution on the stage when performing with Digging Up, and now we are on progress to make a material for Digging Up's 2nd album.

10 What are some young Bandung bands in any genre (no deathcore please!) that we should listen to especially those with a different or unusual type of sound?

Dedra: For now I'm following progress from Interfectorment, Bloodgush, Gore Infamous, Guttural Disease, Jarah, and Anorgasm. They are bands from Bandung which I'm observing for now.

Dedra: Thanks Mr. Jack and  Busukwebzine for this opportunity. 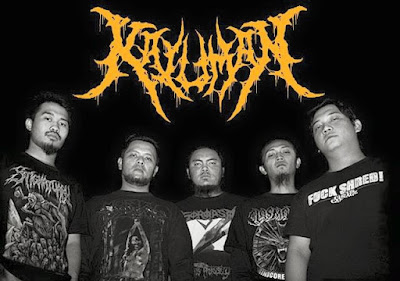 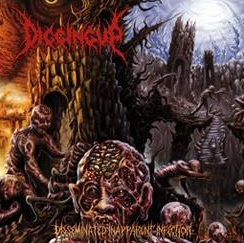