Chester (vocals and rhythm guitar, FEAR INDEX): We started off in 2012 and we are making our first EP right now. We have been playing in the underground scene, until this year, April, we played one festival in Taiwan called Spring Screen.

C: Our style is based on thrash-metal mixed up with some modern groove-metal. We sing in English. We play something like a thrash-metal verse and then turned into groove.

Mathew: This music is more modernish like Lamb of God.

KJ: What are your influences?

Mathew: Pantera, Big-4, Metallica, Megadeth, Anthrax, and Slayer. The basic influences are there. We listen to all sorts of metal from hair-metal to death-metal.

KJ: So, individually, what are your influences for each band member?

KJ: Maybe he’s in the wrong band [all laugh].

KJ: How about drumming influences?

KJ: Your main influences as a guitar player?

KJ: Are these influences for a solo project or do you play this progressive style in Fear Index?

Douglas: In the future I hope I can [laughs] but I’m still learning.

Chester: In our songs we did feature solo passages. In that section Douglas can use the techniques of harmonic progression, as in that genre. There is room for him to show off his talents.

Mathew: Think of us like Metallica. Chester is the singer and the rhythm guitarist.

KJ: Think of a better example!

KJ: No, their singer is the bass player.

KJ: How is the progress for the EP?

Chester: It is at the mixing stage right now. It should be done by the first half of 2015.

KJ: How many songs will there be?

Chester: There are five.

KJ: Are the songs from the demo included on the EP?

Chester: Yes, it will be two new songs plus the three songs from the demo.

KJ: Does the demo sound different from the EP?

Chester: The demo is made up of songs with instruments from the computer. Now we use real instruments.

KJ: Is the line-up the same as for the demo?

Mathew: Yes, it is the same line-up since the start.

KJ: How did you all get into western metal as we know this is not a trendy fashion in Hong Kong?

Mathew: For me I was brought up in Dubai. My friends were listening to grunge and then punk style such as Offspring. Then people listened to nu-metal such as Mudhoney, Slipknot and Coal Chamber around 2000. When I started going to uni, people listened to many types of music. In 2003 MP3 was taking off and you could discover many types of music including metal genres. You can find the metal genre you like best and start practising it.

Chester: Actually it is the same as Mathew’s situation – the internet boom and MP3. When you grow up as a teenager the mainstream music scene gives you boring pop songs with no energy...

Chester: There is no emotional feeling.

Mathew: It’s a fantasy world, it’s not real. Everything is like happy ever after, life is not like that.

Douglas: Same as Chester. He said that Hong Kong music is like pop music. No-one is talking about metal stars. I started to learn guitar and practice and then I got into the music and then find another good metal band to practice.

Zyrus: [interpretation into English by Mathew]: One of my friends gave me a Dream Theater CD and I was impressed. I started searching different metal bands to listen to. I go to local CD stores such as HMV and browse.

KJ: Are there any shops selling metal CDs here?

Mathew: Two years ago yes, now no. The last shop closed down. No-one buys CDs so you can’t sustain the shop.

KJ: How is the metal scene in Hong Kong?

Mathew: HK has seen through the whole thing from HC to post-HC to Jap Rock...

Chester: I started going to local band scenes ten years ago when I was a kid. There were only two heavy bands in HK: BlackWine and King Lychee.

Mathew: They were a hardcore band. They still exist.

Chester: Before 2007 so far from internet we saw that there were three other heavy bands, but they all disbanded before the 2000s. After 2010, there started to be more heavy bands. That scene is still small compared to the old band scenes in HK. 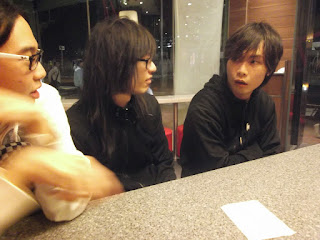 Mathew: You could say that the HK scene is kind of weak. The venues are not very convenient for people to go to. In HK space is a problem. The venues are in warehouse areas. The parents may not allow their kids to go out late to the shows.

Chester: Ten years ago kids had more passion for the band scenes. Before they would go to the venue before the show started and continue right until the end. Ten years ago you would find that.

Chester: Now you would see more than ten shows a month, with different genres including rock and pop and Japanese rock to HC and post-HC and maybe death-metal.

KJ: Are there metal-only shows?

KJ: What are the future plans for the band?

Mathew: Try to get our new EP out and spreading it worldwide and trying to get gigs to perform around the world if possible.

Douglas: Finish the EP and then tour around Asia. That’s the plan yeah.

KJ: Any dreams for the future?

Mathew: Hopefully being able to sustain the band and be able to perform worldwide if possible.

KJ: What are the band members’ jobs outside of the band?

KJ: What can be done to improve the metal scene in HK?

Mathew: If there was more media exposure.

KJ: Does the metal scene have a bad image in HK?

Mathew: It does actually. I won’t say HK is a special society. It is not strict but the image of a person is very important. If you have tattoos people think you are a bad person. People here are not open to looking at different types of things. This type of music is wild and fast. People will think: “what is this? It doesn’t make sense” [laughs].

Chester: Local people are not used to explore new things. They will stick to what they have in their hand and what people around them are doing.

Mathew: It’s media-driven and they follow along with trends.

Chester: They are quite scared to be different. If their friend says it is good they will convince themselves to accept it. If someone says “metal is loud and noisy” other people will freak out.

Mathew: Before Taiwanese pop dominated the market but now it is Korean pop. Especially for HK the music here is nothing. Forget the [Canto-pop] scene. There are no recent outbreaks of artists. In Canto-pop it is still Anita Mui’s generation. The lyrics and song structures are just recycled.

Chester: It’s not as hopeless as Mathew says. I grew up in HK. The metal scenes are growing. Even in international scene the genre trends are changing. Maybe a few years’ later metal trends will come back to HK. Ten years ago I was going to BlackWine gigs in a small venue. I think it is going to improve. It needs time to establish.

Douglas: I hate K-pop coming to HK! The girl students come to learn guitar. They want to learn Korean songs on guitar. I don’t know how to teach them [laughs]. It’s not a language problem. It’s the music style.

Mathew: Repeating the sample over and over; the loops keep refreshing.

KJ: I see there are many Indonesian people living here in HK. Did you think of playing a show for the Indonesian community because metal is so big in Indonesia now?

Mathew: That can happen...but we need a venue first. Maybe when we get our EP released.

KJ: What is your message to the fans?

Chester: We love you all [laughs]. Without you we are nothing.

Mathew: We hope you enjoy the upcoming EP. Finally it is coming out.

Douglas: Hope to see you soon.

Zyrus: I’m speechless. They have said what I wanted to say!

KJ: What is your comment about Fear Index band?

Sam (bassist, BLACKWINE): They are young and good technique and energetic; they are great.

Crab (vocalist, BLACKWINE): They are cool and stylish. 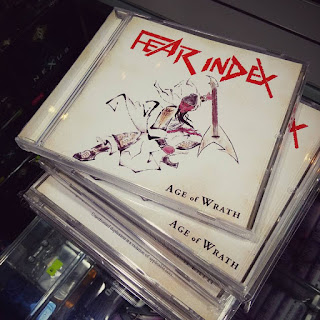 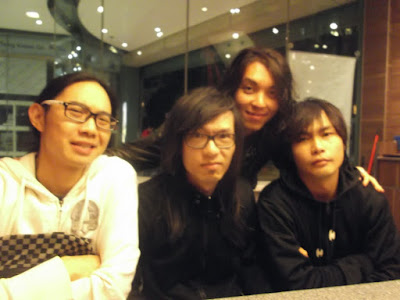