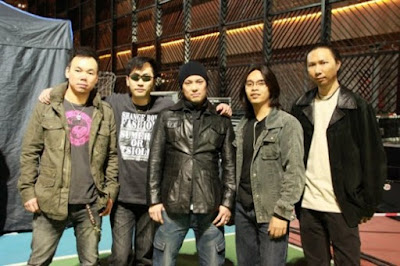 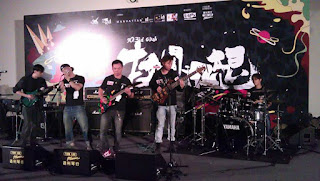 Sam (bassist, BLACKWINE): The band was set up in 1998. We play progressive-metal mainly. We have played for fifteen years. We have two albums. Michael and I are the core members who set the band up in 1998. We had an Indian drummer at first and one friend of mine played guitar and vocal (Marty). Marty left in 2007. Another vocalist Hing joined the band in 2007. Another guitarist left in 2000 and then the band had four persons until 2001 then Jovi joined up and stayed until now.

KJ: What is your style and influences?

Sam: We are mainly influenced by Dream Theater. Their songs and performances were very attractive to us. We are very influenced by them. In our band of five people we have our own influences.

KJ: So, Sam, what are your influences?

Sam: I listen to metal, pop, hard-rock, fusion, and Japanese-rock. Steve Bailey, session bassist, Billy Sheehan, and John Myung of Dream Theater are my other influences.

KJ: Are there influences from Cantonese music?

Sam: I can say that because Linxi, lyric-writer, was an influence. He wrote pop music. He can write lyrics on any topic but for our music I usually write the lyrics.

KJ: What are the lyrical topics?

Sam: They are about stories. Both albums have a different story. In the first album it is a story about World War 2. In the second album it is about a murderer and the police. They are both concept albums. The artwork is also based on the concepts. After we released the CDs in 2002 and 2008 we had CD release shows. In this show we also made some videos and a short movie featuring live performance. This is so the audience can know more about the story. The lyrics are in Cantonese. It is our mother language so we prefer writing all our songs in Cantonese. If the audiences like our music they will try to find out what we want to tell. In our second album I have some English translation in our books and in our CD. I hope that it will not just promote our music but something about the culture and Cantonese language.

KJ: Crab, what are your influences?

Sam: He was influenced by us.

Sam: Before he joined the band he knew nothing about band scene. He only knew about karaoke and Cantonese pop songs. 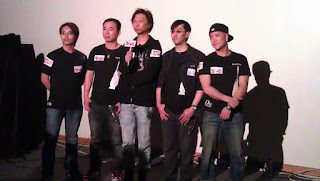 KJ: Is his voice good for progressive-metal?

Crab (vocalist, BLACKWINE): Thank-you, thank-you. Singers can sing pop songs also. Pop songs are not easy to sing. Anita Mui [pop singer], she is one of the legends in HK.

Sam:  Crab practised very hard for our songs because our songs are very different.

Sam: Clean and powerful. He has a large range; suited for any song.

KJ: What are your comments about the metal scene in Hong Kong?

Sam: I think the trend sometimes rules. Nowadays not many bands play metal or they change because the trend is not metal now. They play pop or hardcore. The trend really rules. Not many bands can keep the style very much.

KJ: How many people usually go your shows here?

Sam: Sometimes maybe one hundred. That is already quite good. Of course in HK some shows want to attract audience so they invite more famous and popular bands. There are no metal-only shows. Sometimes they only watch their favourite band. If other bands play they go outside or smoking.

KJ: It’s hard to play when people are not interested. For example, if you play in a bar for the tourists.

Sam: We are very tired of it. When someone invites us we usually perform.

KJ: Are there metal fans here?

Sam: Not many but they are still here.

KJ: Is there a studio and producer here who can produce metal bands?

Sam: Usually in HK we have our own rehearsal room studio for recording. We use DIY and our own computers to make very simple recording of our music. We can’t afford a professional studio. We try our best to make our music at lowest cost. Rich people are not playing the music like us because it’s really time-consuming.

KJ: How often do you play?

Sam: A few every year; only five or six per year.

KJ: Did you ever play in other countries?

Sam: In China in the past. We performed in Taiwan and in China.

Sam: Chthonic is popular in HK because they have a great beauty bass player.

KJ: Did they inspire any local people to form metal bands here?

Sam: I don’t think so. They just want to watch their performance and their bass player. Of course in our mind they are a very big band and they become international; it’s great.

KJ: Do the people here not understand western music?

Sam: Partly true. People do not want to spend time to practice, to work hard on their favourite music. They just listen and watch performance. Playing in a band is time-consuming and money-consuming 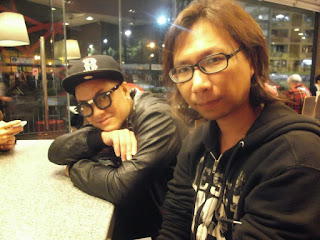 KJ: What are your band members’ regular day jobs?

KJ: Oh, we could have met earlier today then! I was doing nothing.

Crab: I work in the airport.

Sam: The others work in office and are civil engineer.

KJ: What are your future plans?

Sam: Next year we hope to release our third album. The songs are still in the writing process. I think next year it can be released.

KJ: What is the progress?

KJ: Do you plan any changes to the style?

KJ: What do your family members think about you playing this music style?

Sam: Our members’ families also support our band; we are quite lucky.

KJ: Any dreams for the future?

Crab: I want to play at Expo, Asia Expo.

Sam: I hope we can be an international band and known everywhere.

Crab: I want to play at some music fest in HK or in other country.

Sam: I hope everyone can enjoy our music and I hope we can influence some people to play in bands.

Crab: We want to release the latest album soon as I was not the vocalist on the first two albums.

KJ: The four members of FEAR INDEX band are also here. What are your comments about BLACKWINE?

Chester (vocalist and rhythm guitarist, FEAR INDEX): Actually I saw them live round ten years ago. At that moment it was the beginning of hardcore trend. They were very impressive as they are the only band to show off their technical skills.