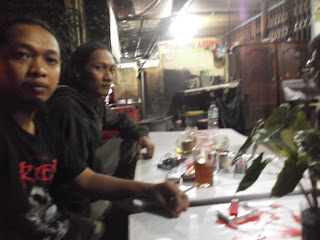 Kieran James (Busuk Webzine): Please tell us the history of the band.

Weaponized (vocalist): We were established in 2005. We were formed in the middle of a community called Gresik Metal. This formation is not the original one. Many times we changed formation. I am the only original member.

KJ: Have you got any EP or album?

Vocalist: We will release our EP this month [December 2014]. It is called Awaking Inferno. It includes six songs.

KJ: I think the vocal is more like a DM vocal. What do you think?

Vocalist: Yes. The voice character is like that. We never planned to make a voice character like that. We just go with the flow. I know and I feel that the voice is not truly BM. But this is the way of the band. Too many people say like you say that the vocal a like a crazy man. A long time ago some indie magazine from Malaysia told me that my vocal is more like KREATOR.

KJ: The voice is not too weak in the recording. It sounds loud and strong.

[KJ note: The vocal of this band sounds like a mad king who has been locked in an upper room in his castle and is moaning to be released!]

KJ: What are the influences for the band?

Vocalist: The main influence is MARDUK. The other influences are KREATOR, SARCOFAGO, and SEPULTURA.

KJ: VENOM? I can hear some vocal influence.

Vocalist: Yes, VENOM. We also want to incorporate some thrash-style and punk-style and combine it into Black Metal. In the future we might make a song without the fast tempo.

KJ: Dimas and I heard the new BLASPHEMER EP which had some effective slow Heavy Metal songs. 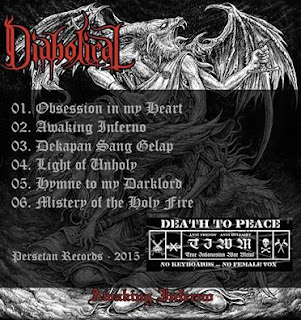 KJ: Why do you like to play Black Metal and not other genres?

Vocalist: For me we are not choosing BM but BM choose us.

WARPLAGUE (guitarist): We know BM first of all and we continue to choose BM up until now. In the deep of our hearts we say Power Metal. This is the truth, not joke.

CHAMELORD (drummer): Because BM music is challenging. The speed is really fast and there are many strokes – such as single-kick and double-kick. There is a combination of speed and technique.

KJ: What are the lyrics about?

KJ: Can you give me your comment on each band, first WARKVLT from Bandung?

Vocalist: In the BM scene WARKVLT is not an old band. The personnel are old men in the skin but the band is a new band. WARKVLT album has character but they mature in their material.

Vocalist: In Surabaya BM scene BLASPHEMER is one of the oldest bands but up until right now we have not heard the material. We cannot say much more about the music. One time I played on the same stage and I heard the single of BLASPHEMER. I think it is similar to MARDUK.

Dimas Valerian: In my opinion in East Java the BM scene is going down and down. If this is true, why is this?

Vocalist: If we look at the albums and songs from the BM bands they still exist. In Gresik four BM bands will release a CD – DIABOLICAL, EMPTYS, TRIUMPHATOR, and GRIM INFERNUS.

Dimas Valerian: Look for the regeneration of BM bands. It is getting slow to find new bands with young people to play in BM. Is that true? Why?

Vocalist: I think because in the 1990s era, especially in East Java, young people think that metal-music is BM. That is the golden era of BM in East Java when the regeneration was very fast. Nowadays that is changed and the trend has changed. Now BM is no more a trend as it was in the 1990s. This may be the main reason.

Dimas Valerian: What is the way to have the golden era back?

Vocalist: The bands like DIABOLICAL must be consistent. They can be examples for the young generation who want to ply BM for the first time.

KJ: What is your comment about the bands which sacrifice the animals on the stage?

Vocalist: We are getting upset with the question like this because it is always asked by many people. It depends on the individual bands. They have to take on the responsibility. I’m getting tired to tell the bands not to do that. If someone asks me about that I will say it is their responsibility. The important thing is that DIABOLICAL do not do that. I am an animal-lover too. I do not do animal sacrifices literally but many times I do the drunken ritual. It is much better than animal sacrifices [laughs]. The other bands might have but we have our own drunken ritual...but not onstage, just before and after.

KJ: What are your future plans? 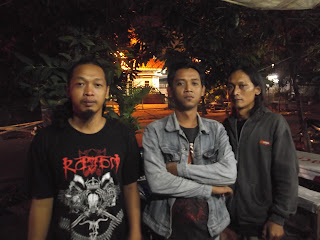 KJ: Do you want to have a bass player or you don’t want?

Vocalist: Right now we have one already but he is not an official member.

KJ: There is a depressive BM band in Australia called CROWNED which has two guitarists and no bass player permanently.

Vocalist: DIABOLICAL will not play depressive Black Metal [with no bass player]. We always use a bass player. However, now our bass player is not an official member. We still search for a bass player with full commitment to the band.

KJ: What is your message for your supporters?

Vocalist: Stay on the track, stay committed to the music. We hope that Busuk Webzine can become the media which will be read by the younger generation that can learn to play BM. 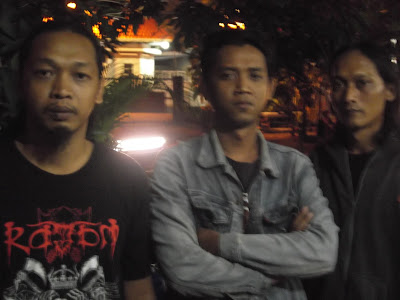