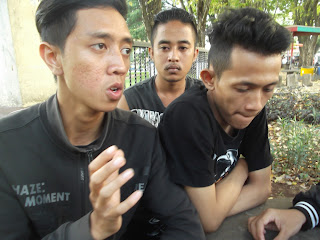 Kieran James (Busukwebzine): Please tell us the history of the band.

Hendrik Pratama (vocalist): We were formed in 2011. The first name was VONIS MATI. The meaning is: SENTENCED TO DEATH. After our first gig we wanted to get more serious so we checked in Google to see if there was another band using this name. So we found out that another band was using this name so we could not use it. The band was based in either Bandung or Jakarta. So I suggested the other name TYRANNICAL MIRROR.

KJ: Why did you choose this name?

Pratama: I took it based upon the political view. “Tyrannical” comes from the tyranny which is a common factor in Indonesia according to me. If someone wants to lead Indo they have to look in the “mirror” to avoid becoming “tyrannical”.

KJ: Have you got any songs?

Pratama: We have two demo sings. We plan for an album next year 2015. We already have a total of five songs, including the two singles. We are planning to collect six songs to make a mini-album. 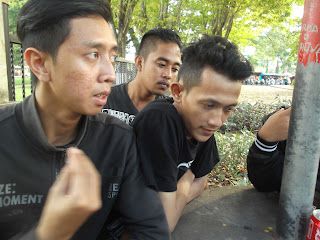 KJ: What are the musical influences?

Ilham: UPON A BURNNG BODY.

KJ: Why do you choose to play this sort of modern-metal instead of old-school DM like SICKLES plays?

Pratama: We liked DM before but after listening to deathcore we decided that we all prefer it and we find it more of a challenge to play deathcore.

Dhinie: Have you ever played outside of Bangkalan?

Pratama: Yes. We played in Surabaya and applied already to play in Sidoarjo. We paid the registration fee but the gig was a fraud so we were cheated.

KJ: What is your comment about this band, Irsyad?

Irsyad (vocalist SICKLES): I think it is a good band with an aggressive performance.

Rony (bassist SICKLES): This band needs to be more solid onstage. They need to develop a stage-act and solve the miscommunication on the stage.

Arie (guitarist SICKLES): My advice is that they should never give up. The band is having some internal problems. They are having a problem balancing the band with work and university.

Jamal [teasing and joking]: When will you get married?

Ilham: After graduating from university.

KJ: Do you prefer religious girl or metal chick? 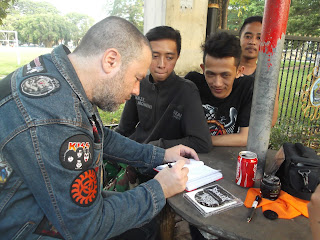 Dhinie: What if the religious girl refuses their activities in metal?

Band: We will find another religious girl who accepts our activities in metal.

KJ: What is the future dream for the band?

Merza (drummer): To be more famous and to have a lot of gigs.

Pratama: To finish the album and to make another album and to be influential for other bands. We want to bring an Indonesian name into the metal community outside Indonesia.

KJ: What are the good and the bad things about th metal scene in Bangkalan?

Pratama: We complement each other by lending band members to bands who are missing a member. We support each other.

KJ: The bad side?

Ilham: We have not found a bad side to it.

KJ: Do you want to always stay in Bangkalan or you may move?

Jamal: It is a beautiful city.

Pratama: We want to prove that even though Bangkalan is a small town we can be better than other cities.

Dhinie: What is your dream gig?

KJ: What do you think about BULLET FOR MY VALENTINE headlining Hammersonic?

Rony Sickles: The promoter only tries to get more audience. BULLET FOR MY VALENTINE has many fans here. 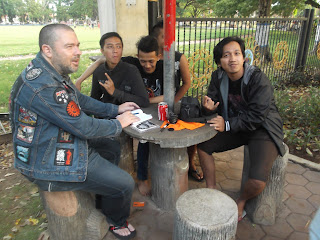 KJ: Is your music style similar to BULLET FOR MY VALENTINE?

Pratama: Different and better. I am also influenced by WHITECHAPEL.

KJ: Do your parents support you playing metal?

Pratama: My parents do not support me but I insist because I want to show that I can be a success with metal. I want to prove that metal is not as bad as my parents’ image of it.

Ilham: My parents support because they introduced music to me starting with progressive-metal and then METALLICA and old-school music. I want to make an experiment with metal. 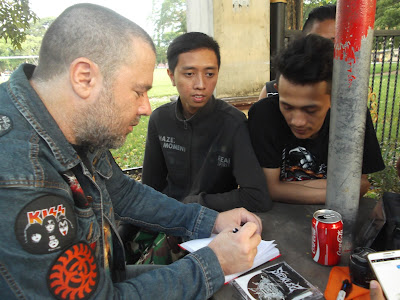