Our interview with Jihan, Rifal, and Haidir of KREMASI (Bangkalan, Madura Island Metalcore), 4 December 2014, with comments by Irsyad (SICKLES) 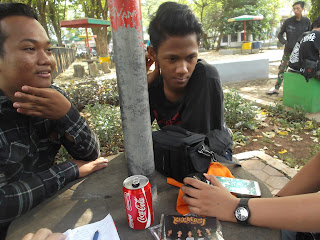 KJ: Why did the other two players leave the band?

Jihan: Both of them made another band and they cannot manage the time between the new band TRAFFIC LIGHT and KREMASI.

KJ: Who played on the one-song demo?

KJ: Do you think you can continue because you only have three people or will you give up?

Jihan: We will keep going because we can ask our friends to be additional players. We ask Rony from SICKLES to be bassist and Ilham from TYRANNICAL MIRROR as second guitar. 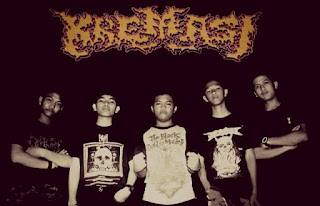 KJ: Will they become permanent members?

Jihan: No, they are just additional players.

Jihan: No, we will stay with the three of us.

KJ: Which people helped you the most with your music?

Jihan: These people here today, the other musicians. As SICKLES said, the community here mostly consists of players instead of the bands and the fans.

Dhinie: Do you play a lot in Bangkalan?

Jihan: No, we mostly play outside of Bangkalan. 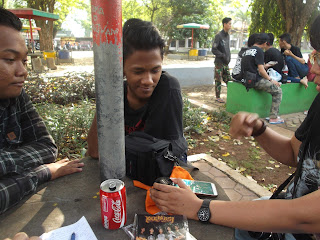 KJ: What is your genre?

Jihan: We think that it is thrash-metal but some people say it is metalcore.

KJ: What are the problems playing metal in Bangkalan?

Irsyad (SICKLES vocalist): The permits to make the gigs here are very difficult. We must ask for permit from the police or the government. There are the problems with money and the crazy bureaucracy.

KJ: What is your favourite Indonesian band?

KJ: What is your future plan?

Jihan: Making an EP or album.

Dhinie: How many songs did you already prepare?

Jihan: We already have six songs. These are all new songs. Totally we have seven songs but the old song from the first demo will not be included on the album.

Irsyad (SICKLES vocalist): I like KREMASI because it is a persistent band which sticks to their genre. Songs of KREMASI are very aggressive.

Dhinie: When will the album be released?

KJ: Are you changing your music style or not?

Jihan: A lot of changes.

Jihan: The music is more mature and aggressive. 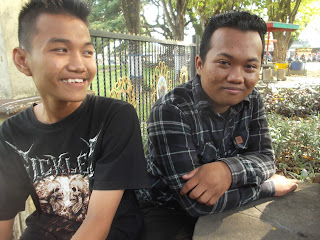 KJ: In Bangkalan why are there no women musicians?

Jihan: I have a gothic band with a female vocalist called MYSTERIUM.

Irsyad: How many gigs have you played?

Jihan: We forget how many, really a lot. 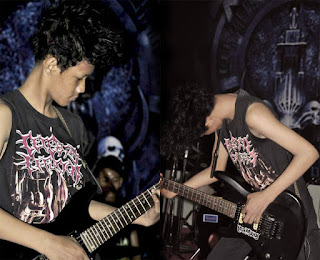 KJ: Do you want to play in Bandung in the future?

Jihan: Yes, dreaming of being on the same stage with BURGERKILL.

KJ: What are the good and bad things about the metal community in Bangkalan?

Irsyad: Some of them got drunk and it made the others uncomfortable with that. The people from outside the community saw them as bad boys.

KJ: Can you go to the mosque here wearing metal shirts?

Jihan: Yes, as long as it is clean. Your clothes have to be very clean. It is a rule of the religion if you go to the mosque for “Sholat”. 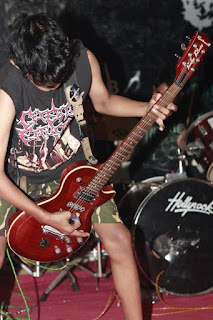 KJ: What do your parents think about you playing metal?

Rifal: Sometimes I must escape the house quietly if I want to go for rehearsals or gigs.

KJ: What about your parents, Haidir and Jihan?

Haidir: The most important thing is that we must put school as priority. If we do that then they support it.

KJ: Do any girls go to the metal shows?

[No answer so Dhinie tries again with another question]

Dhinie: Is it only your girlfriends who go to gigs?

Jihan: I don’t have girlfriend so I’m open. There are some girls in the crowd.

KJ: Where do you play the shows in Bangkalan?

Jihan: There are certain places indoors such as cafes and sports centres. 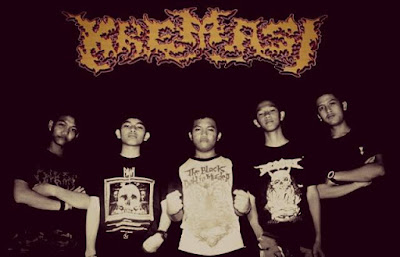