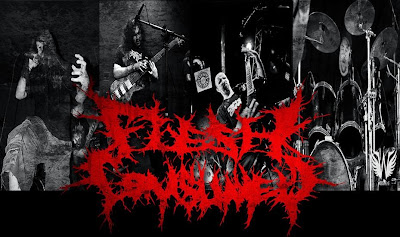 John Yoedi: Hi Corey, How are you there? It has been long time. We haven’t talked since i have ordered Flesh Consumed t-shirt hahaha and thanks for giving me a chance and agreeing to this interview.  Anyway, are there new news from your band ‘Flesh Consumed’ at the moment?

Corey Athos: Hey John, what’s up brother? Thank you so much for the interview.  Flesh Consumed has a lot of stuff going on right now. We are currently writing for the new album “Hymn for the Leeches” and celebrating our 10-year anniversary.

JY: Would you like to introduce  the new line up from Flesh Consumed? I see they’re all sickness musicians.

CA: We have Eric Cohen (ex-Arkaik), Brent Williams (Atrocious Abnormality) on the kit, Shaune Kelley (Dim Mak, Ripping Corpse, ex-Hate Eternal) on guitar, and myself doing vocals. This lineup is some of the most talented musicians and I am honored to work with them.

JY: You formed the band in 2003 and there were many problem with your band especially problems with guitars, bass and drums…. And every album the members changed. Well, only you as original member until now since Ep 2006 ‘Inhuman Butchery’. If you don’t mind, would you like to tell us  what was happened? And how confident are you feeling that this new lineup is the right one?

CA: There have been many, many lineup changes with myself being the only original member. Either I have had problems with them or vice versa. I am a very hard worker and when people don’t reciprocate, I have had the tendency to engage in conflict. Some people can’t take it, some people can. It’s hard running a band without stepping on people’s toes. Regardless I have slowly gained more patience over the years and this new lineup are hardworking musicians and, most of all, good friends.

JY: Well, I know it must be very frustrating trying to get an album together with a new team so often, intentional or not! For instance, you have, I believe, had a different drummer, bassist and guitarist on every album. How do you manage to adapt to things and get the job done?

CA: I’m a madman…haha. I just do what I have to do. It’s either that or the band breaks up. Not even the apocalypse can keep Flesh Consumed down. 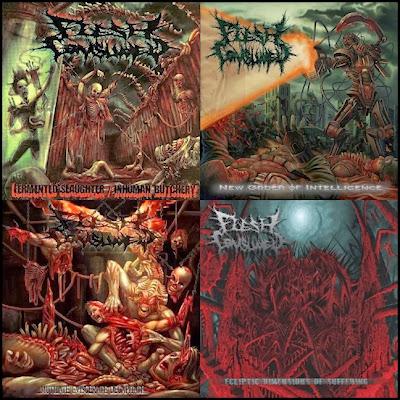 JY: All albums from Flesh Consumed have been released by Sevared Records and Uniqueleader, as I know, they are really great labels for brutal death metal bands in the world. And also they have an excellent distribution system.How far are you into the contract your signed? And what kind of label would you consider signing with?

CA: I’ve wanted to be on Unique Leader since 2001 and that finally came to fruition. Barrett at Sevared gave us a chance and got the band in the circuit and I am forever in debt to him for the work he did for Flesh Consumed. We are currently signed to Unique Leader for another album. I’ve always liked Relapse so I could foresee us going with them but I also like Unique Leader so we will just have to see how this album goes.

JY: And who will be releasing for the new album ‘Hymn For The Leeches’? Sevared Records or Uniquleader Records?

CA: Unique Leader, but we do have a Flesh Consumed Collection coming out on Sevared. It is a collection of our EPs and some bonus live tracks.

JY: How far do you have to prepare new songs for a new album then? How many songs will be available for the new album? And are there a host of special guest on the new album ‘Hymn For The Leeches’?

CA:  It usually takes me about six months to prepare for a new album, from inception to completion. There will probably be nine tracks plus interludes. We will have Steve Tucker (ex-Morbid Angel) and of course, Matti Way (Pathology, Abominable Putridity, Hydrocephalic, ex-Disgorge). We are also looking for a third spot.

JY: What kinds of things inspire you musically and lyrically? Would you say that there are any particular themes that you would like to talk about in your songs, and that it’s important to have some sort of messasge to put forward in your music?

CA: This new album is about absolute power! Reining supreme over these sycophants. People have leeched off me in the past so this is a song to them, “Hymn for the Leeches”.  Other themes in the past have been psychosis, bloodshed, multiple dimensional reality, putrefaction, suicide, sadistic torture, robots, the apocalypse, WWIII and WWIV, etc.

JY: Did all the band members throw ideas into Flesh Consumed music or did you have one uniform concept from which you built the picture up gradually?


CA: Some were fascinated by it. Some didn’t care too much about the lyrical concepts, just the music, which I can respect either way.

JY: Mostly brutal death metal bands writing lyrical themes about gore, anti-religion, mutilation, torture, rape and etc. Did you write the lyrical themes, as I said before, and who’s responsible for writing the lyrics?

CA: I have written about all that excluding religion and rape. Those don’t interest me. Most the straight-forward gore stuff came at the beginning of my career. I’m responsible for all the lyrics.

JY: You have a good deal with Toshiro Egawa for artwork for the new album. As we know, he is really great artist. How did the deal come about?

CA: I’ve wanted to work with Toshihiro, for many years. I heard he stopped doing band art at one point. Anyway, I saw him on Facebook and asked him. He said he was into our stuff so we worked out a deal. I made a concept in detail and emailed it to him. Now he’s working on it. I’m amazed that he was willing to work with us. Real excited.

JY: And how important do you think the artwork is ? Should there be a certain synergy between the artwork and the music?

CA: Yes, the artwork is extremely important. It is the first thing you see when sifting through CDs at your local record store. In my opinion the art and music should be intertwined.

JY: I want to ask you about you personally now. When did you start or choose to play death metal? Which bands, back in the day, inspired you to start playing death metal?

JY: You aren’t only playing in Flesh Consumed but if i am not wrong...you are also playing for some bands like Hydrocephalic, Funeral Rust, Umbriel and Tortourus ?

CA: Hydrocephalic is an amazing band. I got seven of the sickest vocalists together to do this one project. It’s stressful but the payoff shall be grand. Torturous is a real fun project with my friend Junior from Peru and Bryan from Cerebral Rot.Funeral Rust is on hold but I take a lot of influence from Immolation on that one. Umbriel was just a project back in the day. I am also working for Hepi and Decomposed. There are a few other bands, too, but my main band is always Flesh Consumed. Period.

JY: Another thing i wondered about with all your years of experience within the music business are, what aspects of it you particularly liked and disliked?

CA: I like mostly everything. I’m not the most patient human being on earth so sometimes that can get me in trouble. I don’t like getting a van together for tour, that’s about it.

JY: Just as a side question, what do you think about Busuk Webzine?

JY: I know that the overall feedback from both fans and metal media has been overwhelming. Do you really care what potential fans and musical critics like me even think of your work?

CA: I just try to be true to myself, my ears, and my soul. I don’t write for anyone else but to tame the wicked beast who dwells within. If it’s genuine, the fans will feel that. If not, everyone is entitled to their own opinion and I respect that.

JY: Everyone knows USA is a great place to find metal bands and we can see lots of the sickest bands from there. Are you involved with a scene in your local area? Tell us a bit about this.

CA: Yes, we were very involved in the local scene, going to shows, playing shows. Recently I have moved into the mountains and all the musicians live elsewhere, so it’s a little harder to go to shows but I will always support underground death metal.

JY: That’s me all out of questions. Thanks for your time and for answering this interview. Best of luck for your band. Anything you wish to add to conclude this interview?

CA: Thanks for the interview John. You’re awesome! Most of all, thanks to everyone who has supported us and all our fans.