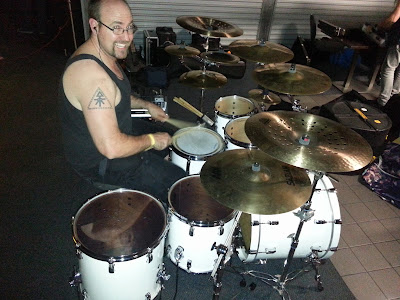 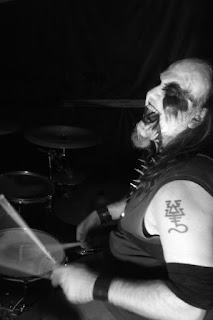 Corey Athos: What is your name and where are from?
Dan Grainger: Daniel Ryan Grainger from Perth, Western Australia. Also known as ‘Maelstrom’ in black metal circles.

CA: Give us a brief bio and what eventually led you playing the drums?
DG: I entered high school in 1996 when they were starting a new instrumental program. We each to had to choose three options for instruments we wanted to play. Drums was actually my third choice but because no-one else that year chose drums; I got them by default.

CA: What was your first experience playing live like? were you nervous?
DG: I played at various high school end of year concerts, presentations for parents to see where their tuition Money has gone (HAHA!) and lots of high school parties, etc. But my first adult bar gig was 2001. Not nervous, just keen to kick ass! High school performances held me in good stead.

CA: What bands do you or have you played for?
DG: I hate this question. My main bands are Wardaemonic and D.F.C, but I’ve previously played for Nexus, Impiety, BeyondTerrorBeyondGrace, Morphica, SIlent Knight, Nails Of Imposition, Ilemauzar, Xeper, Divine Codex, Mhorgl, Ur Dragur, The Fourth Eye and probably more I’ve recorded or played live for …

CA: Have you trainwrecked or had to stop a song due to your drumming?
DG: Yeh once recently, because we play to click tracks now, and I was so pissed off I played the wrong song and had to rewind it and start again. But we were only 5 seconds into it!

CA: Many drummers just play as fast or as technical as they can just for the sake of being fast and tech in extreme metal.. I love how your drum patterns and fills are written for the song rather than to show off .. Do you intentionally play to compliment the music or is it just  natural?
DG: I play whatever feels good. If i think the song needs it or if I feel I need to change it up or do something creative. Most people I play with don’t have a problem and yield to my judgement.

CA: Besides bashing the kit what do you do in your spare time?
DG: I attend gym almost every week day, I walk my dog, write lyrics for my bands and record bands commercially in my studio. Maintaining my house is not fun, but it must be done too …

CA: Dream kit?
DG: The kit that moves itself in and out of venues and then back into my car.

CA: What drew you towards drums opposed to any other instrument that your parents wouldn't get pissed off hearing?
DG: As I said earlier, it was a lottery. I could have easily gotten guitar or saxophone, as were my other options. I never thought about playing drums until high school.

CA: Are you self taught or did you /are you taking lessons?
DG: I took lessons once a week for the 5 years I attended high school, with my tutor Vinny Crea who was a conservatorium gradúate. He didn’t teach me how to blast though.

CA: What are some of your main influences drummers (besides Neil fucking Peart)  or musicians in general that inspire you to be a better musician?
DG: In the beginning it was Lars Urlich and Igor Cavalera. But nowadays, I dig John  Longstreth, Aesgir Mickelson, Billy Cobham and anyone who makes fast and technical look progressive and flowing.

CA: What gives you inspiration musically or in general?
DG: People who work hard towards their goals, regardless of their chosen field. Them and my muse.

CA: How do you feel about the state of metal nowadays?
DG: Facebook is the blessing and the curse. It makes small bands seem big and the opposite. It’s great because everyone has an opportunity to promote themselves, but now the market is flooded with product, throw some Money at it and it seems great, even though it may lack soul and compassion.

CA: Whats your favorite type of extreme metal?
DG: I’d say bands who do black death in a progressive and intelligent way, Akercocke probably being a prime example or their modern versión in Voices.

CA: How many releases have you been a part of or are in the works and on what labels if any?
DG: Far too many to count. I’ve released 8 full lengths, with 2 more recorded. 5 EPs with at least 4 more yet to be released. Countless demos and EPs i’ve recorded but never got a release, or never heard from the members …

CA: How has your technique evolved over the years?
DG: Hopefully for the better! Less effort and more expenditure. It’s more economical and i don’t hit as hard.

CA: What do you think about when onstage?
DG: Everything except for drumming I guess! My focus is usually shifted because I’m very comfortable. Let’s say breasts.

CA: Top  three bands?
DG: Tough …… Symphony X & Nile at the top and the third one shifts around, depending on tastes. Lets say Akercocke right now …

CA: Worst three movies?
I walked out of Double Jeopardy, I couldn’t get through The Room (but i think that’s the point) and Avatar: The Last Air Bender, because the cartoon promised it would be so great.

CA: What was the weirdest or most fucked up experience you witnessed or been a part of onstage?  In normal day life?
DG: A guitarist answered his phone and told the person to “call back” into the mic. Total Wanker. I watched Radiohead mess up 2 songs the same night and start them again. Unprofessional …

Normal Life? I pulled a guy from a crashed truck who was having an epileptic fit and probably would have choked If i hadn’t found him. When he came to, he tried to run into traffic …

CA: What kind of advice would you give to up and coming drummers  that look up to you as a drummer and person?
DG: Sell your consoles and buy an electronic kit.

CA: Well that's about it any shout outs?
DG: Sexy Dishwasher repairman Brad who writes the songs I love so dearly. And my muse, of course.

[By Corey Athos only for BUSUK CHRONICLE WEBZINE.]
at November 12, 2015