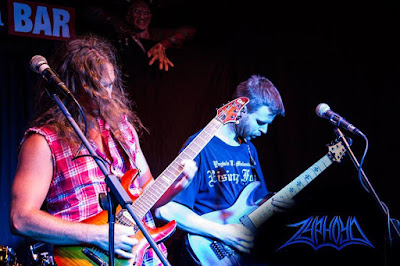 Zyphoyd is based in Victoria, Australia and is a Metal band which is influenced by such genres as, Prog, Thrash, Neo Classical and Extreme elements, which makes for a sound which is hard to put into a category and a sound which is very unique.


Band's Biography:
Kieran and Glen have both played together in earlier bands and projects since late High School and under the name Zyphoyd were lucky enough to play many shows and tour the North coast of NSW with Legendary Oz Guitarist Phil Emmanuel from 2006 to 2010 when Zyphoyd was an Instrumental project. In 2009 Zyphoyd released their first EP Zyphoyd Prelude To The Storm. A instrumental album of 5 cuts, containing Shred, Neo Classical, Prog Rock and Eastern Heavy Metal elements impressing some Monster Guitar Players in the Australian Music industry such as Peter Northcoate, Jeremy Barnes and Phil Emmanuel.


In 2011 both Members moved from the Mid North Coast of NSW to Melbourne, VIC and changed the direction of the band with Main Songwriter Kieran Larkey concentrating on moving away from the small market of instrumental music back to their Roots with Kieran writing and singing on the newer Material. The band still retained elements of the Previous Instrumental works with Trade off solos and Harmonies reminiscent of the 80s Shrapnel era.

In 2014 Zyphoyd Released the EP Three Days Of War and since 2012 have been gigging around the Melbourne scene as a Duo in hopes to establish a full lineup. They have been featured in Heavy Magazine and on UK Radio Station The Wayward Rock Show. 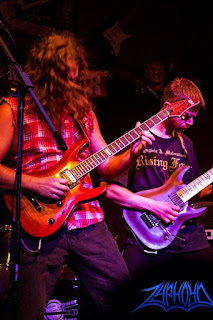 Before I got the Three Days Of War EP, I hadn’t really heard much of Zyphoyd only what was on their facebook page, so I wasn’t exactly sure what to expect. But once I heard the EP, I was blown away by what was some amazing metal. I have let a few friends have a listen to the EP and they also loved the EP. Three Days Of War is in my top 10 favourite albums / EP’s from 2015.

Zyphoyd is not your typical heavy metal band as such, with so many different influences from different genres all rolled into what is their very own unique sound and style, from the first moment I heard the Three Day Of War EP I loved it. The sound quality is great as is the production, the guys in Zyphoyd have done an amazing job with Three Days Of War. With influences from Symphony X, Dream Theater, Metallica, Megadeth and Iron Maiden you know that you are in for some great metal.


Unfortunately due to not having a drummer at the time they have had to use a drum machine, but that doesn’t take away just how great this EP is, as they did the drum tracking themselves. The guitars are the EP are brilliant, the riffs and solos are some of the best I have heard in a long time, both Kieran and Glen are two very talented guitarists who definitely excel at what they do. Kieran is an amazing vocalist with some insane growls and harsh vocals. Kieran and Glen work really well as a team and they obviously enjoy what they do as it shows on the EP.

Zyphoyd said that they are hoping that 2016 brings Zyphoyd a full line-up: "There has been a tremendous lot of hours put in over the years that translates to what you hear in our music! We are looking at recording a full length album, are currently recording a song which leans towards a progressive sound and are looking forward to many gigs with some great bands!"
I am very much looking forward to seeing Zyphoyd play live when and if I get the chance. If you get the chance to see these guys I highly recommend that you do and when and if you do, also grab a copy of the EP Three Days Of War. Facebook: https://www.facebook.com/zyphoyd/timeline?ref=page_internal
Soundcloud:  https://soundcloud.com/zyphoyd
[By Collin Brophy for Busuk Chronicle.]