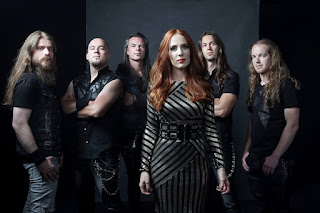 EPICA - Some may wonder why I'm reviewing EPICA. Yes I suppose it is more logical to review only death-metal bands or review all the bands. However, our group of people (John Yoedi, Bobby Rock, Popo, Roy Agus, and me) only arrived around 6-7pm on both the nights so we only saw some of the bands. Also EPICA made a great impression on me. I had never heard this Dutch gothic band before and I know nothing about gothic or symphonic metal but this band made a very good impression. They have high operatic female vocals [by Simone Simons] and being a non-goth the only comparison I can think of is Kate Bush. The keyboard-driven music works to back up the vocals and does not do much more than that. The singing especially is just beautiful. this sort of music I really believe could heal the mentally sick and the deeply depressed and the schizophrenic. It is really beautiful and spiritual. I think metal has shown in the past it can be beautiful and many death-metal heads and metalcore dudes of today forget this or don't know this. The melodic sections of IRON MAIDEN are beautiful, the melodic parts of "Master of Puppets" and every bit of "Orion" are beautiful and no-one used to say they were non-metal. This band EPICA reminded me again of how metal can be beautiful and uplifting. The only comment I have is it would be good to hear the band perform more instrumental sections without vocals and more guitar solos. Yes the voice is important but the band can be more than that.

OBITUARY - The mighty OBITUARY from Tampa, Florida - one of the inventors of the death-metal genre and one of the original bands of the Florida death-metal scene. I admit to be slightly worried because I had read some good and some not so good reviews in metal magazines about recent OBITUARY shows in the reunion era. Some people had harshly suggested the band has no relevance in today's world and should just quit. To me OBITUARY is one band that represents a time and a place - Florida early-1990s brutal death associated with Scott Burns (producer) and Morrisound Studios. Unlike CANNIBAL CORPSE, which is now a global American product like the Big Mac, OBITUARY is more connected in people's minds to a certain time and a place in metal history.

We know Allen West's bipolar SLAYER-style guitar leads on the early albums and more recently Ralph Santolla's expert soloing. However, the band this night had no lead guitarist. This turned out not to be a bad thing as without Santolla we got to hear the band sounding closer to its early-1990s sound. West's leads were never really vital to the sound anyway - it is the slow dirty groovy riffs which defined OBITUARY in the classic era and the short faster sections which were a welcome relief.

This night OBITUARY made a very positive impression. The band looked and sounded as if frozen in time, straight out of Tampa, 1989. John Tardy looks forever the same - long permed blonde-brown hair, black sweatshirt, army shorts, white socks, and running shoes - and that wonderful voice, the greatest voice of death-metal. OBITUARY play with a charm, an innocence, and a sense of humor that are sadly missing in today's super-serious, super-brutal death-metal world. With brothers Don and John Tardy the permanent core of the band with guitarist Trevor Peres, the gig had the charm of a Tardy brothers garage rehearsal of 1986 or 1987. This night Don even gave a drum solo and the band was patient when the lights went off and the sound system gave trouble. You will not get from this band any of the rock superstar attitude - if any band sums up the original spirit of death-metal it is these guys. The band played "Slowly We Rot" (fantastic), "The End Complete", and "Back to One" among the seven or eight songs in the one-hour set. I left that night feeling my faith in death-metal and in humanity restored - humility can win out even in metal, simple boy-next-door charm still has a role to play. 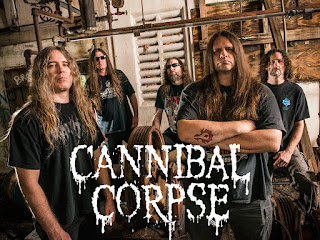 CANNIBAL CORPSE - The Cannibal boys were the second last band on the Saturday night. They played around seven songs including "Gutted", "Blowtorch Slaughter" (awesome), "Addicted to Vaginal Skin", "I come Blood", "Hammer Smashed Face" and closer "Stripped Raped and Strangled". I had seen this band before (see my review). The band may not have the charm and innocence of OBITUARY - they are the McDonald's production-line of death-metal, churning out a new album of brutal death most years in the last 20. However, the band deserves full marks for professionalism, energy, and passion - they put on a brilliant performance each and every time, never letting anybody down. Each member apart from the drummer stands in line across the front of the stage in the same position each time. It is like a workplace with each worker in her/his same cubicle day after day. CANNIBAL CORPSE is incredibly dedicated and professional - they are doing a job and they do it with passion like the best schoolteachers you ever had in your school days. This is a complement and not a slur. The band is a tight working unit and Fisher is the perfect front-man - he provokes and insults the crowd to get them more crazy but he is not a nasty person at heart, it is a game, a part of the showmanship. Fisher's humour and verbal games are the human side of this band, technically speaking the band sounds like a perfect industrial machine during the songs themselves. The band impressed this night and it was sad they could not be the last band to play instead of CRADLE which failed to make any impact on me.

Two of the original Florida death-metal bands OBITUARY and CANNIBAL played at this festival at the edge of the world and proved how enduring and important the music has been. None of the more modern death-metal bands which played on these two days were anywhere near as impressive.

Full marks to the metalheads who could not afford the festival entry fee and stayed outside the compound listening including our friends the boys from the band MURTAD - that is dedication. No marks to the organizers promoting cigarette smoking through the Indo-princesses in the red-and-black dresses (very non-underground) [by Kieran James, 1 May 2013].