Kieran James (Busuk Chronicles)1: Hi, can you tell me the early history from the formation of the band up to now?
King (INTERNAL LEPROSY): It started back way back in between late 2008 and early 2009 when me and Paolo met. We were recruiting Paolo to do the vocal parts in our band that time. The band didn't work out and we both ended up good friends who share the same interests in music and so we decided to form Internal Leprosy. We wrote songs in Paolo's room and kept them until we found other members. There were line-up changes and people came and went until we set aside the idea of the band because we couldn't find the right people who would fit in perfectly. In 2012, I had a hardcore band. I had a few friends in the scene who put up shows and I decided to contact Paolo and proposed Internal Leprosy to bring it back. Paolo said yes and I made a post on Facebook announcing that we're looking for a drummer. Arron replied and we set up a meet and that was the start of it. Up to now we're still playing at gigs.
Arron: Paolo and King decide to form a band called Internal Leprosy. I saw their post on Facebook that they need a drummer. I left comment to that post. I said: “Can I try because I love to play heavy music?" We jammed after we met and I got the position for drums for the band up to this date.
Paolo: Internal Leprosy was officially formed December of 2014 but we started in 2009. There were a lot of line-up changes and a lot of rehearsing but drummers didn't work out for some reason during those times but it changed when Arron joined our team. He showed some perseverance for being a heavy metal fan and he always wanted to be a better musician and that is something that impressed us. Internal Leprosy began playing gigs after a few jam sessions.

KJ2: How is the response of people to your mini-albums / album / demos?
King: Well we haven't released our EP Judicial Blasphemy yet but we had two songs released online. One of those is "One Killing Nation" which I had made a DIY music video of. People responded very nicely about it and we're really thankful to those guys who supported us on that.
Arron: It’s amazing because they love our EP album in Mexico; they play our songs on their local online radio. Mexican people and Italy support our band and that’s our pleasure to serve them good music.
Paolo: Guys in Mexico were impressed with our EP. Mostly the fans there are fans of raw energy of death/thrash metal. We have no other plans but releasing our first EP for now.

KJ3: What are the most influential bands for you guys in playing music?
King: For me, my list is staggering but the main bands are of course: Slayer, Deicide, Cannibal Corpse, Decapitated and those grindcore and goregrind bands like Pig Destroyer and Waking the Cadaver just to name a few.
Arron: Deicide, Slayer, Kreator, Nile, Dying Fetus, Cannibal corpse.
Paolo: Deicide, Cannibal Corpse, Slayer, any old style metal. I like the rawness of the old-school.

KJ5: Are the songs you create using English or foreign lyrics?
King: We decided to use English for everyone to grasp.
Arron: All of our songs are in English so other countries could understand the meaning of our songs.
Paolo: Since the English is the most recognized language in this planet we will use it to the world to express our thoughts about this f***ed up society and system! But I like to scream out loud using my local language as if the world could understand it, why not?

KJ6: What are the lyrical themes?
King: Gore, violence, horror, political views.
Arron: We are anti government. We kill all the people who abuse our society with our music. Our EP album entitled "Judicial Blasphemy".
Paolo: Gore, corrupt society.

KJ7: Why do you all like to play old-school instead of deathcore or other modern styles?
King: Originally we had that idea to be a brutal breakdown kind of a band but since our old-school influences were too strong and many kids out there were doing those heavy brutal breakdowns already we decided that we should just stick to the roots.
Arron: Old school is the best!
Paolo: For my own personal taste, I want to preserve the raw intense energy of old school metal; we’re not against their new movement. We just want to do the fury of old school style. We have no plans to soften our music. We want it that way as Internal Leprosy.

KJ8: When did you first become fans of metal bands?
King: I was a bit of a late bloomer actually. I grasp a lot of kinds of music. I was really into N.U. metal when I was in high-school so I think it started there.
Arron: Since I was in grade school. I browsed the internet for heavy songs until now I still do some searching to know different bands.
Paolo: When I was 16 I began listening to a lot of metal bands. That is my outlet and expression of my anger. I listened to Sepultura, Cannibal Corpse and Deicide at that time.

KJ9: What do you say to people who ask why you play western-style music?
King: We never really encountered that question before but I think it's not really labelled as Western Music anymore since many people around the world already made their different styles of music in their own ways and made their own style of metal based on which country they're from.
Arron: I don’t care about them. Change the topic or the conversation will end fast. Hahaha!
Paolo: Music is a general language for me. It doesn’t belong to any race. It’s a form of human expression with arrangement of notes.

KJ10: Do the wives and girlfriends of the personnel support what you are doing?
King: No because I don't have any as of now haha!
Arron: I don’t have a girlfriend. We’re all single but our friends support our music.
Paolo: I do not have any.

KJ11: What are the best and worst things about the community in your city?
King: The best thing? I think the food. From where we’re from the food is so good. The worst is that everyone is only paying attention to what they look like and what kind of material stuff they possess. That annoys me. The government is shitty, that's given but the people have no respect to one another that's why they couldn't find peace on anything. They always argue on small things and make those things a big deal.
Arron: The worst is crab mentality. The good is I don’t know.
Paolo: You mean metal community here in Philippines? Well the scene is still at a growing stage. I hope that metal will have a place here in terms of the industry. 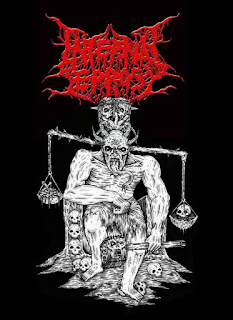 KJ12: What are your most memorable shows or experiences onstage?
King: I think that was a show in our home-town where I think we are second to the last band to play and people really waited for us to play and they got so crazy when we got on stage and did our thing. The crowd was headbanging all throughout the set. We were new back then and we didn't expect that kind of support that time. It was flattering and awesome.
Arron: For me the Zambales (place in the Phiippines). We were the main band even if we aren’t that famous, the crowd treated us well. The love our music!
Paolo: Memorable? All of our gigs here are memorable. Good ones and bad ones.

KJ13: Have you got any message for the fans?
King: "Thank you" won't even touch the fact of how much they support us. We promise to keep getting better and make more songs. Thank you so much!
Paolo: For our fans out there keep supporting metal! Without you there is no audience to listen to us. You are the biggest part of metal empire!
Arron: Thank you so much..and keep supporting the underground metal scene. 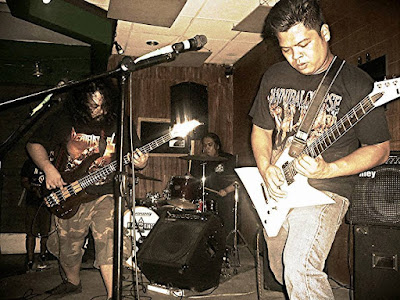 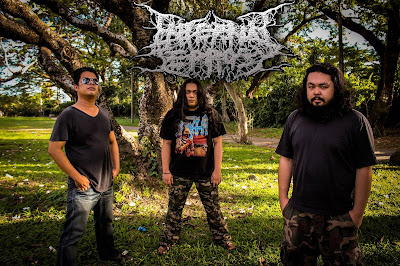 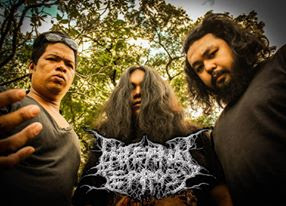