1. Kieran James: Thanks very much for this chance to interview you. First of all can you give us the history of the band and the motivations for starting the band?

Drake (Tenor): Thank you for the interest in our work. Ruins of Elysium is an Epic Symphonic Metal band with classical tenor vocals and videogame soundtrack inspired sound. Using operatical male vocals is something almost no band in the scene uses and we wanted to innovate in that point, so that was the first idea of the band and how Ruins of Elysium came to life. I am quite the geek guy too, so the flirting with geek universe’s themes and the epicness of videogame soundtracks came in a very natural way.

2. What are the band's influences musically and vocally? I'm not a huge expert on symphonic power metal but I think your band is clearly on the melodic side. The thick emotions you generate remind me of "Battle of Evermore" by Led Zeppelin or "Rainbow Eyes" by Rainbow (probably not the best comparisons).

Marcelo (Drums): Musically, we’re always trying to incorporate more and more different influences (from various styles) in our songs, always alongside the main melodic and symphonic metal arrangements. Each member of the band has his/her own preferences, but, more importantly, everyone is open to the new and willing to innovate.

Drake: Having someone think of Led Zeppelin or Rainbow when listen to your work is quite the honor, so thanks a lot! My biggest influence as a classical singer is Jonas Kaufmann, but I tend to listen to many other Heldentenors to learn from them. In Rock/Metal, I would say Freddie Mercury is my biggest vocal hero, being closely followed by Alfred Romero, Rob Halford and Russel Allen.

3. Tell me about the vocalist's classical background? I love the emotion and obviously the quality of the voice. There s nice interplay with subdued melodic soloing too especially the mid section of "Lavender".

Drake: I’ve been studying to be an opera singer for some years and classical singing is my passion. I started working as main tenor in a Ceremonies Group, singing in weddings and other events, learning new styles in the meanwhile, like belting and musical theater. I moved to Germany last year to study and it was a great experience to learn from amazing names of the scenario.

4. Tell me how you came to live in Germany for a time and did German Power Metal influence you? Did you see any German bands live or meet any and members?

Drake: I moved to Berlin, Germany, in order to improve my classical singing technique and, of course, get a little closer to the metal world too. There, I had the opportunity to study with the amazing soprano Janet Williams who taught me so much and made me grow a lot as an opera singer. As a Heldentenor in training, Germany is the place to be. I had the pleasure to see and meet three of my favorite bands: Leaves Eyes, Visions of Atlantis (they are from Austria, actually) and Xandria. Great artists, amazing guys…really an honor to see and also be able to learn a lot from them.

5. What are the future plans for the band?

Marcelo: Our first priority is to finish the recoding of our on-the-run projects and to fully re-launch the band’s visual identity (which is being developed). We’re also looking forward to opportunities for playing live.

Filipe (Bass): We are looking forward to re-release of the older songs, with the new formation playing, and after that finish our first álbum.

6. Relating to Q5 do you plan to experiment with sound? I heard three of your songs and the melodic aspects reign. Did you consider heavier songs like Blind Guardian or even just some plain rougher heavy-metal sections inside songs like Grave Digger?

Filipe: One of our goals is manage to always renew our sound, so yes, experimentation is vital.

Marcelo: We surely do. Our newer songs go from the very melodical sonority to a rougher, death metal-like.

7. Have you heard any Indonesian Power Metal bands? I suggest Umbra Mortis and Valerian. Valerian especially is more melodic and progressive but with a dirty vocalist which is interesting (imagine Kiske-era Helloween with Vince Neil on vocals perhaps).

Drake: To tell you the truth, I never heard but the suggestions you gave us are awesome. I heard Umbra Mortis’s demo and they sound promising. I listened to Valerian’s "Stardust Revelation" and there is also a lot of potential there. It is really nice to know new bands and it is even nicer knowing that Indonesia has such a strong metal scene.

8. Ok, choose your favourite and give a reason - Iron Maiden or Judas Priest?

Filipe: I like Iron Maiden more, cause they were one of the bands that brought me into the metal scene, and I just started to listen to Judas Priest years after I was introduced to Iron, which I regret.

Marcelo: Judas Priest. I still enjoy Iron Maiden but Judas Priest remains closer to me as an influence due to their faster, more power/melodic metal like style.

Drake: I prefer Judas Priest because of Rob Halford. Not only he is one of the greatest singers to ever grace us with his talent in metal, but being openly gay and proud in this scenario is an important reminder of something we can NEVER forget: rock and metal were created to challenge dogmas and paradigms of society, so there can never be a place for any prejudice within our art.

9. Choose your favourite - Edguy or Angra?

Marcelo: Angra, cause they were the ones who got into this metal music thing (hahaha).

Filipe: Angra, cause it was only because of them and Sepultura that I started to have hope on playing to be known around the world when I was young. Today, I know many more, but at first sight they're the greatest I had for inspiration.

10. Choose your favourite: Helloween with Michael Kiske or modern-day Helloween??

Filipe: I like the Kiske era more, I don't know why, I just realised I listen to it more than the other albums.

Drake: I am not a fan of Helloween, to be really true to you, so would you mind if I responded to the same question but to a totally different band? I prefer Nightwish with Anette more and I think Tarja’s solo career is fabulous and much better than her time with Nightwish. Hahaha

11. How do you feel about being in Brazil - does the isolation help or you feel it is a limiting factor? For me I think of bands like Horcas (Argentina) who were brilliant but always sounded exotic or foreign and never got the international success they deserved.

Drake: I think isolation is not exactly the case. Brazil is well known because our tradition with heavy metal and we have a lot to offer on this point. I just think the European scene has to be a little more open to us and to our work. We have a lot to offer! I am aware of only 3 metal bands in the world which use classical male vocals and all of them are American (Ruins of Elysium from Brazil/Germany, Eye of Eternity from the USA and Eternus from Chile), so we are starting a new trend here and I hope the metal world turns its eyes over us. 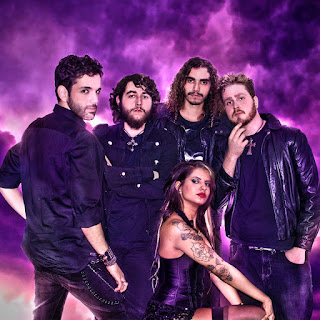 Marcelo: I don’t believe that, nowadays, nationality and/or geographic location is a great problem. It is very easy to know and access content from bands all around the world and our local musical scene is very effervescent, so I don’t think we can complain about isolation.

12. What is the meaning of your band name? A while back I interviewed an American metalcore band called Fields of Elysium.

Drake: Ruins of Elysium was a suggestion from one of my best friends. It makes sense if you feel how dystopic and chaotic our sound is. We bring some metal “dogmas” to ruins by having classical male voice, for example.

13. Lastly, have you got any words for our readers?

Drake: It was a pleasure to do this interview and thank you very much for following our work. We send huge regards to all our fans and friends in Indonesia and hope to see you guys on the road soon.

Marcelo: Keep yourselves tuned because there are MANY news coming soon.