Introduction: It was with great excitement I bought my plane ticket to go to Melbourne to see two legendary veteran Melbourne bands MORTIFICATION and PEGAZUS at the Central Club, Richmond, Melbourne, Australia, 18 February 2012. At Brisbane airport all the Melbourne Victory football supporters were heading in the other direction.

MORTIFICATION started the show at 9pm to an audience of around twenty old-school metalheads mostly around the same age as the bands if not older. It is hard to attract young metalheads to traditional heavy-metal and power-metal unfortunately with the exception of IRON MAIDEN shows. SLIPKNOT is just way too attractive. This was the mighty MORT's first show since 2008 and I had never seen either of these bands live before. The MORT gig had a lot of interest for me not just because the band had not played for three years but because a new album is being recorded and the guitar genius from MORT's mid-1990s era, Lincoln Bowen, has rejoined the band. For many MORT fans Scrolls of the Megilloth from 1992 remains by the band's classic work, widely admired both inside and outside of the white- or Christian metal scene. That was an album where death-metal was the dominant style and it included excellent apocalyptic lyrics warning of doom for sinners written by Jayson Sherlock, Mike Carlisle, and Steve Rowe. After Sherlock and Carlisle left the band it experienced somewhat of an identity crisis, and the band became a revolving door for lead guitarists and drummers with only Rowe the stable fixture. Lincoln Bowen arrived and played on Envision Evangelene, Triumph of Mercy and Hammer of God in the late-1990s, albums which saw MORT experiment with styles and include elements of thrash, traditional metal, power-metal, and even hardcore. Steve Rowe has told me that this is a "deliberate" strategy the band took in the mid-1990s. At that time the black-metal craze was in the ascendency in Melbourne and there were criticisms that the band had not shifted to black-metal as many of the death-metal bands had done. It has to be said that there were some old-school death fans from the Scrolls era who were disappointed with the new releases although all admired Rowe for his courageous return from serious illness. Bowen's strength, and a real highlight on Triumph of Mercy, is his power-metal guitar virtuosity which saved some mediocre songs on that release. I was interested to hear the new MORT songs and how the move to incorporate more death-metal elements again (as heard on on 2006's Erasing the Goblin, MORT's best release since the breaking up of the Scrolls line-up in my opinion) would combine with Bowen's guitars. 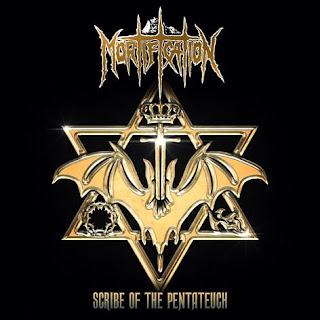 MORT's short set started with thrash classic "Hammer of God" then went on to the title track of the upcoming Scribe of the Pentateuch album. I love that title as it sounds so like Scrolls of the Megilloth - will it be Scrolls of the Megilloth Part II in the manner of Keeper of the Seven Keys Part II and Land of the Free Part II? Rowe's voice is in fine form and he was clearly enjoying himself back in front of his Melbourne home crowd. Jokes and banter lit up the performance. "Scribes" sounded fast and brutal with Rowe's death growls sounding good. It fitted in well with "Hammer of God" so there may be a link between Scribes and the Hammer of God era sound although live performances do tend to minimize stylistic differences across songs. The black-metal shrieks were in evidence on this song too. The band mixed early classics, such as "Brutal Warfare" and "The Destroyer Beholds", with songs from the new album such as "Weapons of Mass Salvation" and "The Jaws of Life". The first song has doom elements much like the interesting song "Escape the Blasphemous Tabernacle" on Erasing the Goblin and modern MORT does this style well. "The Jaws of Life" is also brutal with a nice black-metal vocal hook at the end of the chorus and some innovative post-chorus riffing. The new songs sound strong and brutal and I was pleasantly surprised.

Many claim that MORT's recent output is marred by simplistic Sunday-school sermon lyrics, which are too direct, and tempo and riff changes which are artificial and lack cohesion. The band is overcoming these problems with the chemistry of this new band being very good. Rowe joked to the audience it was line-up number 746 and the old-school home-town crowd gave knowing chuckles. He introduced the new drummer (Andrew Esnouf) as being three months old when MORT was formed and called him an "Australian viking". Rowe told the story of the recording of Scrolls exactly twenty years earlier just down the street in Richmond and how he had to borrow guitar strings for Carlisle from a punk band guitarist playing at The Central Club. "In Garden Hall" was an interesting, new song - it includes some power-metal clean singing by Rowe and, although he is no brilliant clean-singer, the sincerity cannot be faulted. The clean singing definitely does not ruin the song. After the show Rowe told me "the death-metal guys don't like these power-metal singing parts". As promised the band played "Scrolls of the Megilloth". A forty-something fan requested the brilliant "Terminate Damnation" also from 1992 but we didn't get it. The show ended with the very short oldie "God Rulz". Overall an impressive performance and I was honoured to chat with metal legend and warrior Steve Rowe after the show.

Negatives for the gig were the heat in the venue (the PEGAZUS singer said "turn off the heaters"). It was 26C this day in Melbourne but still 25C at 7.30pm. The venue clearly trapped in the day's heat. Also, and this is a very minor point, the beer on tap was faulty and you had to bring full pint glasses into the show venue from the front bar of the same establishment [by Kieran James].

Note: According to Steve Rowe, the band name Mortification comes from the King James Bible, "Mortify therefore the deeds of the flesh" (Romans 8:13).

Please check out MORT merchandise online including those woven patches! The Polish company METAL MIND has released many of the old MORT and PEGAZUS albums in new formats with many pictures and bonus tracks and these are all limited to 2,000 copies each. It is great to see a Polish company honour these veteran legends of Melbourne, Australia heavy-metal. In Metal We Trust!!

Power-metal giants PEGAZUS were headliners and, by the time of their show, there was a crowd of around eighty people. The band mostly played songs from its 2011 release In Metal We Trust and the previous album The Headless Horseman from 2002. The song "The Headless Horseman" was opener with the chorus words of "heads will roll" being clearly identifiable and we all enjoyed the huge JUDAS PRIEST vibe. The vocalist, Justin Fleming, puts on a great show in that charismatic 1980s style and, with his short but dense blond hair and bare chest, he brought to mind not only Rob Halford but also Udo Dirkschneider, the great ACCEPT frontman from the golden era of classic metal. Other songs played were "The Patriot" from The Headless Horseman, and "A Call to Arms" and "Spread Your Wings" from the same album. The vocalist's humorous R-Rated banter ensured that "Spread Your Wings" was prefaced with an R-Rated deliberate misstatement of the song title (just imagine it, it's easy if you try)! The band played "Metal Forever" from Breaking the Chains (1999) and "An Eye for an Eye" from In Metal We Trust. The lyrics on "A Call to Arms" sound somewhat neo-Nazi and Skrewdriverish ("strength and pride is on our side") but white-pride is not the intention here and a good time was had by all. HELLOWEEN is an obvious reference point but the band's sound and style pre-dates modern power-metal. Instead DIO, JUDAS PRIEST, TWISTED SISTER, SCORPIONS, MOTLEY CRUE, IRON MAIDEN, AC/DC, and ACCEPT are references. It was very old-school and the crowd got fully into the set around one-third through with "A Call to Arms". 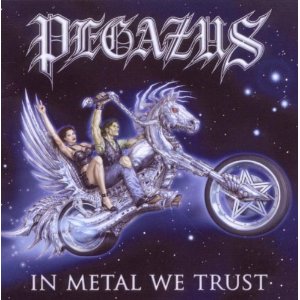 "Dragonslayer" was another highlight with the small, skinny, blond, bandana-wearing bassist (Cory Betts, ex-BLACK MAJESTY) shouting out "Dragonslayer!" at the end of each line in the chorus - truly hilarious. He looked like a chicken putting up its head to crow! This band loves and respects 1980s metal and, like the best bands of that era, took a humorous but not mocking or insulting approach to playing metal. Metal was much more fun and enjoyable before the grim-faced black-metal hordes descended circa 1991. You could even buy PEGAZUS woven back patches at the merch stand! Overall a fantastic show. The vocalist is excellent - he can do the high notes but has more strength and depth in his voice than most modern power-metal vocalists. The MYSTIC PROPHECY vocalist, Roberto Liapakis, and Joacim Cans of HAMMERFALL are good comparisons as well as the usual 1980s heroes. I was also pleased to see a young guy in 1980s denim jacket with a SAXON woven patch among the crowd. I wanted to ask him: "Where were you in '79 when the dam began to burst? Were you wearing denim, wearing leather / did you run down to the front?" Of course 'in 79 he was just a gleam in his mother's eye. Seriously power-metal and traditional metal need to attract more younger fans. The average age at the show was most likely close to the average age of federal parliament although the average IQ and integrity factors of the show crowd were surely higher! 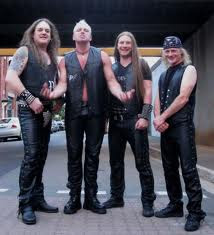 Negatives for the gig were the heat in the venue (the PEGAZUS singer said "turn off the heaters"). It was 26C this day in Melbourne but still 25C at 7.30pm. The venue clearly trapped in the day's heat. Also, and this is a very minor point, the beer on tap was faulty and you had to bring full pint glasses into the show venue from the front bar of the same establishment [by Kieran James].

PEGAZUS biography: Pegazus are a heavy-metal band from Melbourne, Australia. The band was formed in late 1993 by guitarist Johnny Stoj and by 1998 they came to international notice after being signed to Nuclear Blast Records. The band's second album Wings of Destiny was released on the 25th May 1998 and really took flight because soon after the band became an instant favourite with the typical Heavy Metal fans of Europe. That same year the band was invited to play at the premier European Metal Festival, the Wacken Open Air Festival in Germany, playing in front of a 25,000 plus festival crowd of metal fans. After a short trip home they were soon headed back to Europe for a major tour with HammerFall on the "Legacy of Kings" European tour. Since around 2000 the band has returned to playing low key concerts in pubs around Melbourne. 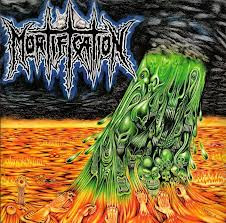 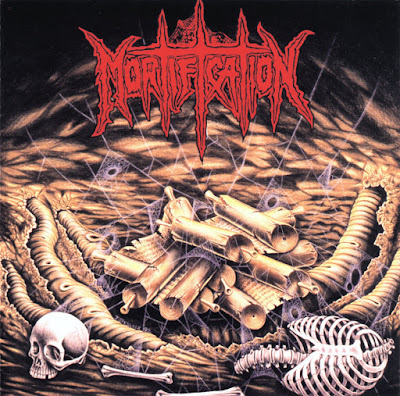 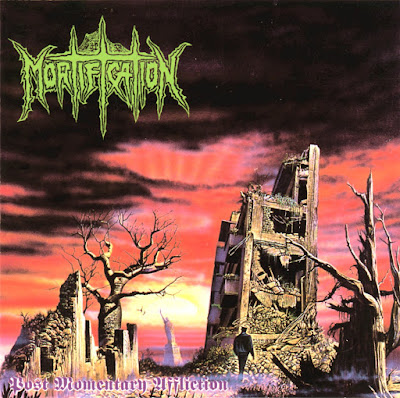 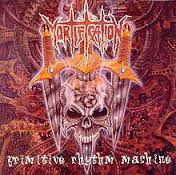