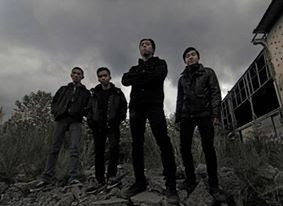 Deana Youthfull Aggression: 1.Tell us the formation history of inplace band from the beginning up till now! What kind of music genre do they play?
Fajar (vocalist): 1. In place of hope was formed in early 2009 on the edge of the city of Bandung, namely ujungberung. originated from the same area, like the same music and the same community, then came the idea to form a band. There has been a few changes in personnel and finally the current position are; fajar (vocal), deni (guitar), simon (guitar), ade (drum) and additional bass player. 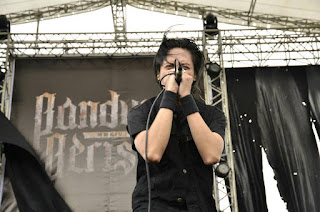 2.How soon did you join the inplace band?
2. Because of the same vision.

3.How many inplace albums are there? Please mention all of the albums' names!!
3. An album titled "The Origin Forgotten".

4.What are the messages contained in inplace lyrics?
4. Cycle of time, point of view, character, such as; life and death, day and night, good or bad, true or false, up and down, earth and sky.

5.Who wrote the lyrics for inplace?
5. Myself (fajar) as vocal.

6.What are the songs you've made in English & Indonesia?
6. Yes.

7. How was people's response to inplace demo or albums?
7. So far so good, and positif

8. What stage is really memorable for you?
8. Bandung berisik 2014 of course.

10.Tell us about the advantages and weaknesses when you perform with inplace?
10. Everything's positif. We're having fun and had a good times.

11.Why do you all like to play metal?
11. Because for us it's not just the kind of music. This is our life, this is our breath.

12. When did you first become fans of the metal bands?
12. Since fifteen years ago.

13.What do you think about underground bands in Bandung?
13. There's a significant change. A good change of course.

14. What are inplace plans in the future?
14. An album promo, a tour promo and a launching album concert.

15.What are the good and bad of the existing underground communities in Bandung?
15. Everything's good, everything's positif, everybody supports each other.

16. Is there a message from all of u guys?
16. Keep playing hard and stay consistent.


[By Deana Youthfull Aggression only for Busuk Chronicle Webzine.]