Kieran James aka Jack Frost1: Hi, could you please tell us the history of the band?

KJ1: This band was established by Ivan ‘Bhatocx’ Wijaya on July 19th 1998. At that time, the band formation was different. On the leading of Ivan KODUSA the formation was changed several times. Before Ivan’s changes the band consisted of Ivan (guitar), TJ (female vocalist), Dicky (male vocalist), Zack (bass) and Beni (drum).

On December 2nd 1999, Ivan passed away because of leukaemia. Considering there’s a vacant place, Dicky the vocalist suggested Lulu to replaced Ivan as a guitarist. It was several figures who took the role as a guitarist. Some of them are Bemby and Fajar. However, Lulu is the one who still remains.

After the band has got its new member, they decided to create a new nuance for their music. Based on Lulu’s idea, the band added Turntable and Sampling instrument to be played by another new member, Amy, who is a female DJ.

I was not so long after the arrival of new instruments that there was another dynamic occurred in the band. Beni the drummer left the band and was substituted by AL, former drummer of Purgatory Band.

In the early of 2000, Kodusa was totally reformed. The original band member remaining was Zack the bassist. Also in this year, the band made its new formation consisting of Ivan (male lead vocalist), Lila (female vocalist), Zack (bassist), Lulu (guitar), Amy (DJ), and Al (drum). Unfortunately, this formation lasted just 2 years. Again, Kodusa was facing shortage of band members. Amy quit because she could not manage to balance her office life. Three years later, in 2004, Al who became Lulu’s husband had to be dismissed from the band because of his involvement in another band called Purgatory. Within the recent Kodusa’s minimalist formation, there was a drummer from TABOO band who acted as an additional drummer for Kodusa.

Despite a lot of changes happening Kodusa still went on its productive way and contributed to music. KODUSA’s song titled ‘Damai’ has been listed on compilation album called “Revolution of Sound2”. The album was released in 2005 by Sony/BMG Indonesia.

When this article was written, Kodusa is going back to minimalist formation. Kodusa put their distinction on their song and lyrics; vocal character of Ives and Lila; attractive bass playing by Zack; solo guitar by Lulu; and Rala (their new drummer). Interestingly, Rala was met with the band ‘accidentally’ when he was performing Taraweh praying at Ramadan 2007.

KJ2: How do the people respond to your mini album / album / demo?

Alhamdulillah (Thank God), their response was generally good. They were happy and enthusiastic with our single and songs. Some of our friends who were listening to our songs even memorised our lyrics very well. Hey also gave us support by buying our album and merchandise. Some of them also gave us some feedbacks and shared with us about our aims and our vision in music industry.

KJ3: Which band influenced you the most?

Each of us has different favourite bands and different inspirations that influenced our musical taste. And none of them has to be metal band. We love Korn, Deftones, Mudvayne, Dream Theater, A Perfect Circle, Incubus, Nirvana, Bjork, Alanis Morisette, etc. We also idolise local band who play religious music such as Bimbo.

KJ4: What is your future plan with this band?

Actually, we always wanted to finish our first album because in the meantime, we released some singles that we shared to some compilations, whether it’s an indie or semi indie compilations. Our purpose was to compile our singles to became one album. We also planned to launch the album with the help of some musicians, who contributed to our songs as a backing vocalist. They are: Iman, Anton (J-Rock band); Eno and Choky (Netral Band); Bonnie (Dead Squad); Al, Lutfi, Bounty, and Apit (Purgatory Band).

Yes. Most of our songs are combination where some part is using English.

KJ6: What do you trying to tell on the lyrics that you have made?

Our lyrics have some themes ranging from social matters, peace, justice, and some of them are religious. Religious in this context was some story and legend based on our holy Quran.

The point is, we are trying to deliver the positive message from it through our lyrics and music. We are also trying to pass the message by using appropriate words, as polite as possible.

KJ7:  Why do you guys like death metal music?

We love metal music, partly because it has a ‘hard’ rhythm, energy, and its full of passion. However, we try to balance the beat of the music with our soft and ‘anti - violence’ lyrics.

KJ8: When was the first time you’ve been the fans of metal?

Hmmm, not sure when is it. Each member of the band has different experiences about that. Perhaps, we started to be fans when we saw some bands like Metallica, Sepultura, Slipknot which were really popular in Indonesia.

KJ9: What would you say to the people who ask why you play western style music?

Hmmm.. not all of western culture is bad or negative. We love western metal musicians and just enjoyed their music, their techniques, and that’s it. About the relatively ‘free’ lifestyle (although not all of westerners are doing that)… we were trying to get rid of it (the lifestyles). We’re not naïve that we have members who did terrible things in the past, being struck with drugs… but it has been the past and they’re clear now. They’re keeping doing a healthy life now and stay away from drugs.

We thought that as long as we could adapt with the positive side and stay away from negative stuff, western culture is nothing to worry about.

KJ10: Do your wives or girlfriends support what you’ve been doing?

Most of them are really supportive of each other. We’ve got husband and wife vocalist at Kodusa. As well as Lulu, our guitarist, who is Al’s wife. Al is playing drums at metal band Purgatory, so Lulu and Al is a metal-musician couple. Moreover, Zack (bass) and Rala (drums) are also supported by their wives.

KJ11: What would be the good and bad things about the community in your city?

We live in Indonesia, which applies eastern culture, and well known for the people's friendliness. We also still respect our heritage and local wisdoms. Morality and good attitude are everything here. As well as how religious the people are. Apparently, people here are very diverse and respect each other. So, generally speaking, lack of morality was just practised by a small number of people.

Besides creating album, launching the album, creating video clips, we really want to be contributing to music concerts especially those which emphasise social and religious aims within the concert. We also are looking forward to being a part of social activities.

KJ13: What is your most memorable performance?

Almost every gig has its own memorable moment. Maybe the most memorable was the event held by local metal bands. This event theme was “Approach Deen Avoids Sins”. We did not expect that the folks would be really enthusiastic. Most of them, we believe, are those with pure life goals: avoid bad things and do things that are worthwhile for others. Some of them even managed to expand this ‘campaign’ to their family and friends.

KJ14: Do you have something to say for your friends?

Hmm, maybe we have to noticing our self first. Disseminating the good deed is nothing if we ourselves could not implement what’s our religion been ordered to us.  Good syiar is not only spread by words but also by real actions. If we could act in a good way, we can say that our aim as a band has already been visible by our friend or acquaintances.

KJ15: Why do you call your genre as ‘white metal’?

We knew that the image of metal is opposite with goodness, which is always represented as ‘white’. For us, white means pure and innocent. White is also related with many Islamic symbols. We are trying to create a perception that, although we are doing metal music, we are doing it in a pure and innocent way. Trying to be in a way that blessed by Allah SWT.

KJ16: Does one finger movement still exist and do you join this movement? (Question from Teguh Prasetyo from INTERFECTORMENT band, Bandung)

As far as we know, One Finger Movement still exists. At the beginning, this movement was ignited by Ombat from a local band called Tengkorak. But, generally speaking, metal bands such as Purgatory, Kodusa, and some local bands have been applying sort of Islamic metal far before terms like “Islamic Metal” or “Metal Tauhid” or “One Finger Metal” was popular. This could happen because, as well as the majority of population being Muslims; there was actually a lot of metal fans here in Indonesia. One interesting example was during the concert we could have a break until adzan is finished. (Adzan is the Muslim call to ritual prayer).  Even after azan, everyone goes to mosque for praying.

There is still a support though. For example was happened to our fellow in Purgatory band. One of their single is titled “M.O.G.S.A.W”, which is an abbreviation from “Messenger of God Shalallahu Alaihi Wassalam” (honorary title for Prophet Muhammad). Then, Purgatory fans suddenly called themselves as “MOGERZ” or “Messenger of God Shallallahu Alaihi Wasallam Followerz”.

Although many people appreciate that ‘unusual’ circumstance, some of them are also pouting on us and feeling awkward about that.  For example in 1999/2000, some folks on the community mocked us as a “HardMus” band, which means HardcoreMuslims. But in fact, those mocked did not let us down. WE are indeed Muslims and we have certain obligation like praying 5 times a day, etc.

Yet, we are still confident with our identity. There are many local metal bands that have same ideology like us and they are also still proud of their Islamic values.

There is an increasing number of new bands with the same values though.

Lastly, thankyou very much. Apologise for being late on answering this interview. Thanks for the opportunity to be a represented metal band in this genre.

[Translation into English by: Ms Okky Irmanita of University of GLasgow, Scotland.] 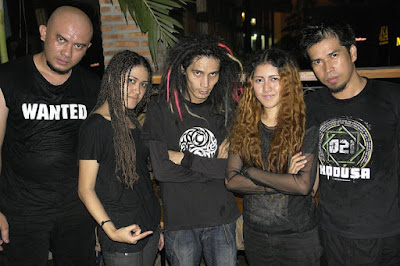 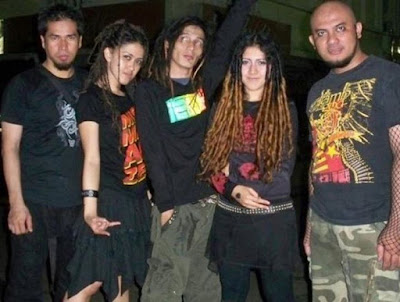