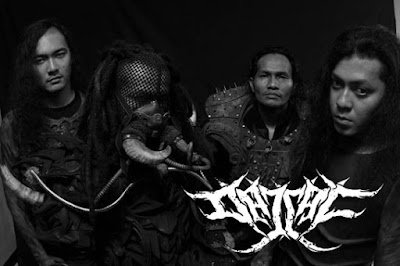 Message from Karkash (guitarist Dajjal, Bandung Death Metal): "Stay tune for Dajjal's total aggression this year with the new energy, formation, and arts! Of course it will be aggressive and more heavy! Hopefully we can enter the studio in the middle of this year to record some new materials. Thanks a lot guys for always supporting us!! We will update to you about our website, fan pages, etc soon. Thanks a lot! Stay true and keep metal ALIVE!"

Interview with Karkash by Kieran James:
The new Dajjal line-up includes three new and talented musicians from Bandung Death Metal Syndicate to replace former members Zulfi (guitar) and Runal (drums). The new members will be revealed to the public soon. Two are from older bands and the drummer is a young person in an old band. The bassist is from a Bandung old-school hardcore band and he has adjusted very well to DM so far. "He really nailed it", says Karkash.

Dajjal has a plan to do live cover versions of Metallica, Kreator, and Iron Maiden in a thrash style but with DM elements. The Metallica song will be "Fight Fire with Fire". The vocals may not be thrash style. "I want to hear Barock Dajjal's voice", says Karkash. "Hopefully we can play Endless pain/ Pleasure to kill too", explains Karkash.

Karkash has written five new songs and the target is 8-10 songs but the band does not know whether to release singles first or albums. "Two things that I love about Dajjal are that we wear costumes and are brutal", says Karkash. "Everytime I perform with them it boosts my adrenaline", he says.

"We are the most controversial band in Indonesia because of our name", says Karkash. Dajjal is Arabic for prevaricator or falsifier. However, Karkash says the real meaning is the acronym for "Dari Jejeran Jalan". It means "we grew up in the street or suburban". Dari = From.. Jejeran = side/lined.. Jalan = street/road. "We are all Muslims but we write about the dark side of humanity. That is why our album was called Human Dark Side", says Karkash [interview via Facebook chat, 21 January 2017]. 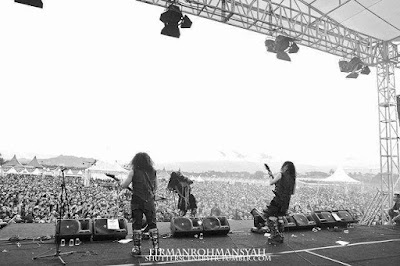 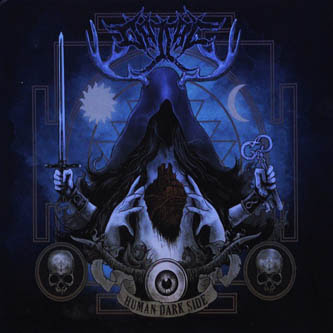