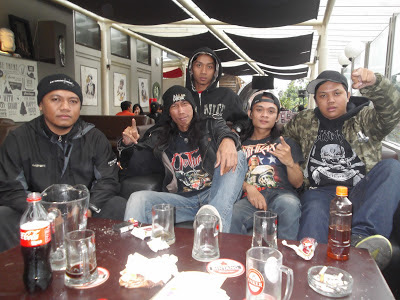 Jack Frost: This is an interesting side-project band made up of so many legendary figures of Bandung death-metal. Please tell us the history of this band.

Abbang (Vokalis): The band started together when we hanged out at the Funhouse Studio in Cicaheum [Bandung] in 2013.

Ferry (Guitar1): It started from chit-chat. I asked Abbang and Uus and last Acil to make this band. It was just to play for fun originally. We wanted to rehearse to make one song then we produced more songs. Then we all decided to make this band serious.

JF: Why did you decide to make this band?

Uus Death (Guitar2): We have the same vision. I hope this band can be successful with the same [united] vision and mission and with the same direction.

Ferry: I wanted to make a different way, different from other grindcore.

JF: What are the lyrical themes for the band?

JF: What are your favourite grindcore bands in Indonesia?
Uus: Local?

Popo (Vokalis Demons Damn): Why do you make the new band as you are already part of other good bands?

Ferry: We wanted a new atmosphere.

Uus: I want to make a unique band.

JF: Will you invite Daniel to join the band?

[Jack Frost note: This question was joke because it was Uus Death who invited Daniel to join Bleeding Corpse but he later left the band.]

Abbang: It’s impossible for us to have three guitarists?

JF: How many songs do you have now?

Uus: Twelve songs but we have a plan to have 20 songs.

JF: Did any record label agree to release the record?

Ferry: Many, but we’re still thinking about that.

Popo: Ferry, why did you ask these people to join the band? Why not ask other guys like Daniel and Abaz?

[Jack Frost note: This question is another Bandung death-metal scene joke because Daniel and Abaz are in so many bands in Bandung.]

Ferry: Iyenk has a good skill; Abbang is very grindcore; Uus comes from the grindcore background; and Acil because we hang out together many times; we have same hobby: to get drunk!

JF: Do you want to tour to other cities?

Ferry: After we finish all the songs we will do the touring. We must find the right days to do the tour because Abbang has a job in the mayor’s office. Ferry must work in Chronic Metal Shop. The other guys must arrange the right time so that they can tour. Butche is our producer.

JF: Popo, what is your comment about this band?

Popo: For this band the first words are “crazy” and “drunken master”. The third word is “a lot of eat”; the fourth word is “always searching for the girl”. They have good material of music. They have brutal grindcore. I think they all have a good connection with each other and to people in Indonesia. They are all active in the scene. I think they will be [successful] to introduce this band to many people.

Popo: My first word is “crazy”!

Bobby: They are best friends; their music is brutal and fast.

JF: Your message for the fans?

Acil Saffar: Don’t give up; keep up the spirit; always support us and love our music!

Iyenk Saffar: Keep the spirit to reach the dream!


[Jack Frost note: They all wanted to keep on talking but we decided we should end the interview there!] 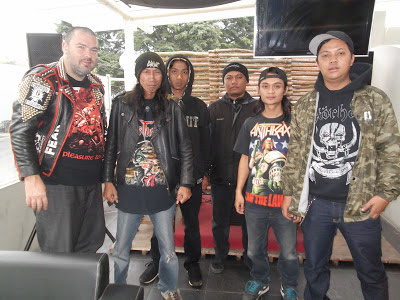 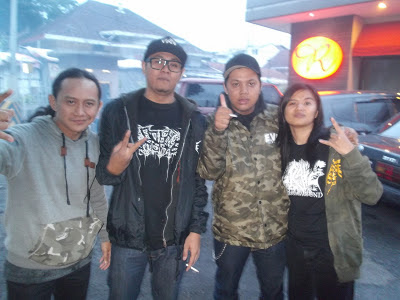