My interview with Samier of Tengkorak, Inferno Music Studio & Rock Shop, Surabaya, 26 January 2014
Interpretation where necessary by: Dimas (Valerian Guitarist) & Verrell (Valerian Drummer)
Expert Comments and Questions by: Dimas & Niza (Climaxeth / Osiris Vocalist)
(Note: Samier is based in Surabaya but the other members of Tengkorak are based in Jakarta)

Jack Frost (Busuk Webzine): First of all tell us your life story, just a short introduction...

JF: The history of Tengkorak then, just briefly...

S: The band was established in 1993. I joined in 2002. At that time Tengkorak just wrote some political lyrics, corruption – not about jihad or anything like that. We started writing about Islam and jihad and topics like that in 2007. It’s in our third album Agenda Suram. We write about jihad because we feel lots of westerners believe that Islam equals to terrorism.  It happened because of 9-11. We started to think how to counter that statement; Islam is not equal to terrorism.

JF: OK, please tell us more about the band’s philosophy and vision?

JF: What are the things wrong with metal lifestyle and what things are OK?

S: A lot of metal fans here say that you are not metal if you are not drunk; you are not metal if you are not tattooed; it happens over the years. If you live in Indo you don’t have to take that lifestyle if you like metal. You have your own lifestyle. As a child you studied your religion, you prayed, it was like that. If you like metal you should not leave what you believe. If you believe it is not correlated with your music. Music is just entertainment. If you like horror movie it does not mean you are a killer or something like that. Don’t adopt the western lifestyle. If the lifestyle doesn’t match with your religion don’t take it.

JF: What about black tee-shirt and long hair?

S: It’s OK for me; it’s not OK for some. In the end we realize the music has power to state our message. If people have a bad message in their music the metal fans think it’s OK. Why then is the good music not OK? In Indonesia it’s different to other [western] nations, you still have religion.

JF: Do you think Indonesia is too easygoing about the religion compared to, for example, Malaysia?

JF: Do you know about the Christian metal scene and what do you think about it?

S: I think it’s good. They do it for the Christian people; to help the people to still believe. Metal does not have to have a correlation with your belief; it’s a different thing, it’s just your hobby maybe. Lately metal has had a message which a lot of kids have adopted.

JF: What is your comment about the band Deicide?

S:  I read an interview with Glen Benton; he said he was not serious with the lyrics; it’s just a gimmick.

JF: At least the early lyrics seemed to be quite serious?

JF: OK, I want to ask are you musician first or preacher first?

S: I’m just a musician [laughs] but I realize that music should have a good message. It becomes our responsibility - to our audience especially; it’s important for us.

JF: Do you aim to convert the non-Muslims to become Muslim?

JF: What do you think of Niza wearing jilbab [hijab] on the stage?

Dimas (Valerian Guitarist): For me it’s not important Jack.

JF: What is the reaction to your band?

S: We had a lot of negative feedback in Jakarta especially thinking we want to...they say don’t mix religion with metal.

JF: What do you think of Jihad, for example, singing about Islamic philosophy and also saying “we are secular band”?

JF: What bands are you most influenced by?

S: There are a lot of bands you know. The main influence is Napalm Death for the music.

JF: What are the future plans for Tengkorak?

S: We should make a new album. Our last album was 2007 you know. It’s been too long. We continue to deliver an Islamic message; we continue to proclaim the message that Islam does not equal terrorist. We hope our audience can still believe what they believe even though they still like metal music.

JF: What do you think of Indo metal musicians dedicating their albums to Allah but using 666 number and pentagram symbol?

S: It’s stupid; they don’t know what they believe. They say “in music don’t believe Allah”, why?

JF: How is Purgatory different from Tengkorak?

S: Purgatory lyrics have a message from the Al-Quran; it puts quotations into the lyrics, but Tengkorak does not.

JF: Do you want to tour in the Middle East and did you get any feedback from there?

Dimas (Valerian): In your opinion what do you think about the metal scene in Surabaya?

S: A lot of the community people here do not know the meaning of community itself. They think it is like a gang. A community should un by itself. If you are a writer you should write about your metal scene or maybe you have a label...
JF: What do you think about the Ariel Peterpan court case?

JF: It copies from the west as well, yes?

S: He is very popular right now, more than before. He is more successful with the new band. It’s a prophet’s name Noah. They go to imam and say “what is the best name for my band?” It’s true.

JF: What do you think of the culture of hardcore genre?

S: I think it’s good because if we learn religion you will find that you should respect family, parents, mother, sister, etc. All the good things come from our religion, your religion...I think a hardcore band should say about religion. Our culture came from religion. If they don’t say that a lot of people think hardcore is a religion. I read that it says metal has become a religion. Wendy of Rolling Stone magazine said hardcore lyrics are inspiring. Wendy is a Muslim. I told her that if you want inspiration you should read Al-Quran.

JF: John Yoedi and I took the 666 out of the Busuk Webzine URL, what do you think about that?

JF: Do you have any political philosophy about left-wing or right-wing?

JF: What are some good young bands in Indonesia?

JF: Do you hope for new young bands to follow the philosophy and style of Tengkorak?

S: I hope so. If they are Christian or Muslim they should talk about their religion, it becomes about responsibility. Indonesia is not western; we have a religion; stay true to your religion.

JF: What do you think of Jasad singing about Sundanese culture on Rebirth ov Jatisunda album?

JF: What do you think of use of inverted cross symbol by Indonesian metal bands?

S: It’s stupid. We should respect the other religions. Those people just follow; they don’t know the essential meaning of the symbol.

JF: Do you feel the same way as some Christian metalheads who feel caught somewhere between the church and the world?

JF: Did you ever use an imam or theologian to advise you on the lyrics?

JF: So to record the new album you will have to go to Jakarta?

S: Yes, I must go to Jakarta for a couple of months to do the rehearsals.

JF: Ok, that is all, thank you very much for interview! Best wishes for the new album. 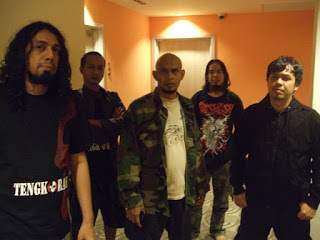