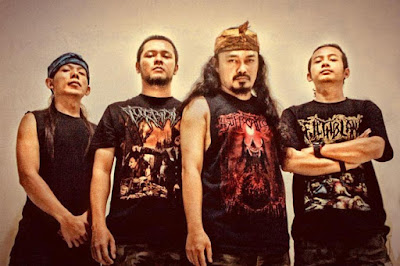 My interview with Ferly from Jasad! Dont want to be a dick, but its one of the best interviews Ive ever read! Thanx a lot Ferly for your time!

Andrew Sick from SICK REVIEWS: 1. First of all, I would like to thank you, Ferly, to accept to be the first interviewed by the « Indonesian Sickness Zine »! And now, tell us about your career, it would be nice to know about the history of metal in Indonesia. When had it started and which were the first bands? We would like to know also your opinion about which international death metal bands who had most influenced the Indonesian metal?

Ferly Jasad: Well, this is my own story of the history of Indonesian metal scene rising began with ROTOR, a greatest thrash metal band from Jakarta released their cassette Behind The 8th Ball, the enthusiasm of local metalheads was unbelievable, and then I knew SUCKERHEAD too, the fact there lot of Thrash metal bands came at that time, and SEPULTURA had a big show at 1992, then METALLICA came in to Indonesia at 1993, I can't deny that their arrival to Indonesia had a big impact on the Indonesian metal scene.

Then I knew ROTTEN CORPSE from Malang, East Java..these guys had introduced me to what we called Indie Lable, they played brutal death metal. Since that time, then GRAUSIG from Jakarta was so intense, there lot of underground bands formed and recorded many various style of metal and also almost every city made annual gigs with a same banner and movement, the underground way!!

Actually you guys can find about the history from Wikipedia or youtube, there was one video documentary Global Metal which is a must to see. From Sepultura, Metallica, Napalm Death, Suffocation to Disgorge, each of them gave influence to many Indonesian metalheads.

2. When have you discovered (When have you found out) the death metal? Before Jasad, had you been part of which other bands?

ANSWER: When I listened to Anthrax, Metallica and Slayer stuff my friend brought me Cannibal Corpse "Eaten back to life", Suffocation "Effigy of the forgotten" along with Carcass "Symphonies of sickness" and Napalm Death "Harmony corruption"..I was like "Holy shit..these bands are faster !!" that was when I'm at Junior High School. 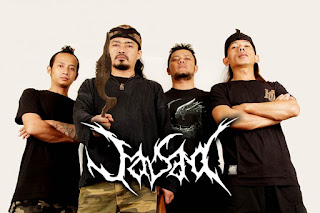 Yeah, actually my first band was called FORGOTTEN, and we had our self release cassette tape "Future Syndrome"...the band was more into Death, Malevolent Creation, Solstice, Pestilence stuff.

3. When exactly have you started to play in Jasad? How have you been approached by the band?

ANSWER: Me and Jasad's vocalist Man joined at 1999 when the band was on hiatus, actually I wanted to form a new one but Yuli (bassist) told me to step in Jasad.

We had a commitment that I will be taking full charge for concepting the music, because they were so busy with daily works, but since Annihilate the Enemy album, we all step in to concept and wrote all the content, that works until now.

4. Tell us about your company «Alliansi Hitam», when did you begin this project? What about your expectations in this company and your achievements?

ANSWER: The death metal scene becomes bigger but mostly they are just a bunch of trendy kids, and they bought and wore bootleg shirts, what kind of bootleg? The one which annoyed me most was when I saw Devourment logo placed into Severed Savior "Brutality Is Law" artwork, and 2nd I saw Jasad with Marco Hasmann artwork leaked from myspace on shirts before we had finished the recording, besides a lot of underground distros sell bootlegs hijack shirts, so since I registered couple of social media account and being friends with a lot of bands, I decided to build t-shirt brand called Alliansi Hitam, it's meaning is Black Alliance..I contacted the bands and printed their shirts, I sent their shirts and I sell the rest. And now I know how big money flows to those distro who sold the bootlegs while the bands didn't receive any cents or stuff.

Achievements? The best things are people support what I do and my point of view about bootlegs. Bootlegs are always there and we cannot stop it, but at least I'm working hard to change it, we are together start to doing propaganda against bootlegs beside we also have a similar hobby, collecting great bands merchandise with great artwork on it!

So now mostly our buyers are collectors!!

5. I would like to know more about Yudiansyah aka John Yoedi. The death of this Indonesian legend has touched everybody even in other countries. I have been fortunate enough to talk to him a few times and he seemed to me to be a guy very focused in the metal scene. What has been his role in the Indonesian metal? Do know you something about his motivations?

ANSWER: John Yoedi is the best dude I've ever know, he spend his life to support Indonesian scene through his media, before he was building blogs, he created Xerox Newsletter and sent the copies to all of his friends through post office, he switch the info about Indonesian scene and introduce to other countries and take the international scene to Indonesia, he wanted that Indonesian people become "open minded" as well, he worked on it with passion, he sent many local cds to his friends in overseas, proof that he was proud of his scene.

I think he wanted to make Indonesian scene looks better and he did!!

6. Congratulations for the Jasad last album! Do you think I could be mean if I say that there’s not too much changing in terms of music and lyrics?

ANSWER: Thank you so much, Andrew, musically if you compare the Annihilate The Enemy and Witness of Perfect Torture, you can find the changes in our musical shape, about progress you can let me know because I won't tell it, the lyrics are into our ancients culture stories and philosophy, and we will stay in that theme for upcoming album. We stop all the horror and gore stuff since all brutal death metal did that.

Right now are on writing process for our EP, the theme will be still around Sundanese but we will make it more deeper, and perhaps there will be some people think it darker because they don't catch and understand it.

7. Tell us about the new album concept.

ANSWER: Musically it's little bit harder and also there will some nice old school riffage too, the vocals will be still in that shape around guttural, growls, high pitch. We also loads with new gears too so we can't wait to record the new material. Rebirth of Jatisunda album is about Sundanese teaching and philosophy and also a little bit about history of our ancestor and for the new upcoming EP it will be about our Sundanese teaching and philosophy too but more focusing into something "five" for exam like Panca Niti (five steps) of human living.

8. Do you mind to tell us briefly about the origin of the Sundanese culture?

ANSWER: The origin of Sundanese culture come from Java land mostly between Citarum river and Cimanuk river which call PARA HYANG (Holyland of God), but we talk about Sunda as a land which called Sundaland (also called the Sundaic region) is a biogeographical region of Southeastern Asia which encompasses the Sunda shelf, the part of the Asian continental shelf that was exposed during the last ice age. The last glacial period, popularly known as the Ice Age, was the most recent glacial period within the current ice age occurring during the last years of the Pleistocene, from approximately 110,000 to 12,000 years ago. It included the Malay Peninsula on the Asian mainland, as well as the large islands of Borneo, Java, and Sumatra and their surrounding islands. The eastern boundary of Sundaland is the Wallace Line, identified by Alfred Russel Wallace as the eastern boundary of the range of Asia's land mammal fauna, and thus the boundary of the Indomalaya and Australasia ecozones. The islands east of the Wallace line are known as Wallacea, and are considered part of Australasia.

9. Have Jasad already been touring outside Indonesia?

ANSWER: Only in South East Asia, great place to see your brothers and sisters in metal so far we played in Malaysia and Thailand.

10. Did you begin to work in your next album? If yes, what the fans could expect about this new Indonesian bomb?

ANSWER: Musically it's little bit harder and also there will some nice old school riffage too, the vocals will be still in that shape around guttural, growls, high pitch. We also are loaded with new gears too so we can't wait to record the new material. We will mix the language from English to Indonesia to Sunda, it's great to see our vocalist Man doing it and how he present it.

We want all the sounds production and theme and layout cover blended perfectly, that's our target now.

11. Tell me, Ferly, which are your 10 favorites bands in Indonesia?

12. What are the death metal bands that had influenced or inspired you the most?

13. Since a couple of a years, Indonesia has much more visibility among the international Death Metallers, so do you think that it’s a positive thing?

14. Do you have some funny stories to tell us about Jasad that had happened during a show or during an album recording?

ANSWER: Yeah we had these big metal open air with millions of crowd, and we enjoyed all the sets until my vocalist forgot and skip to mentioned 1 next song, it was like he mentioned "A" song and we played "C" song, but whatever..we still enjoyed at the stage.

During recording? We had some stupid moments when we were stuck and we must repeat those hard parts and we felt so stressful, we farted in stealth mode hahaha..so everyone was pointing and blamed each other, yeah for that moment, turning air conditioner to coldest temp is recommended hahahah

15. To finish, do you have some words for your fans?

ANSWER: We are much more comfortable to call you friends than fans...that is for Aerosmith [and Bon Jovi - KJ] bro ! lol

Don't be a pussy to admit Indonesia on death metal maps!!

Thanks for your question, sorry it takes some weeks to answer it, we had lot of things to do both for our lives and the band.


[This interview is published here with kind written permission of the legendary Andrew Sick of SICK REVIEWS, Canada.] 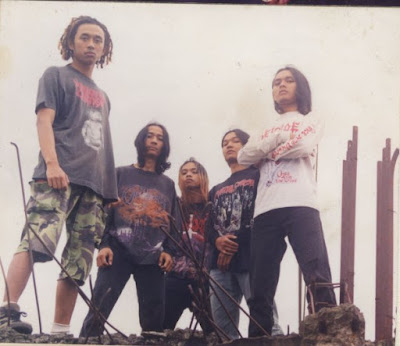 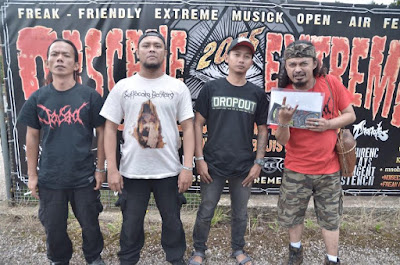 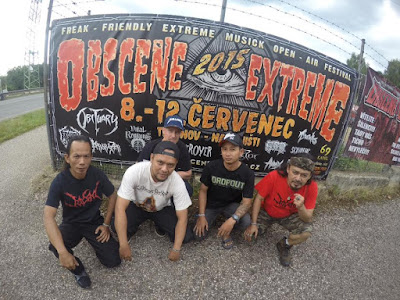 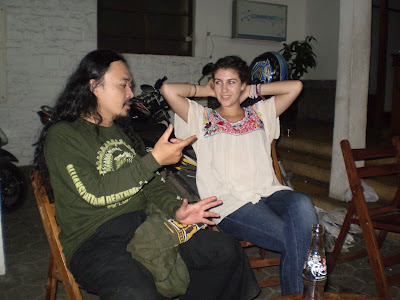 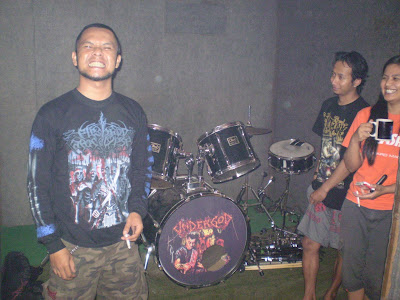 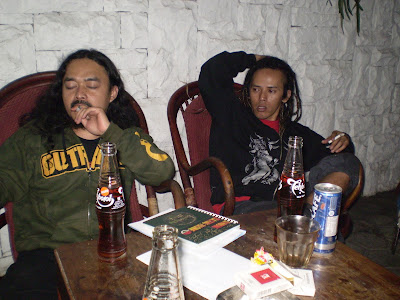 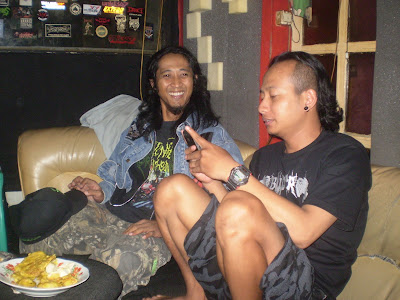 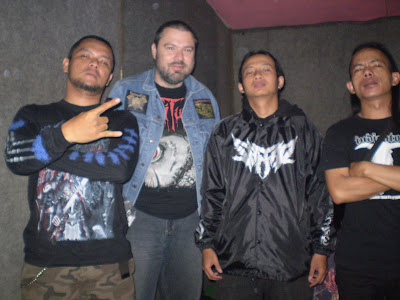 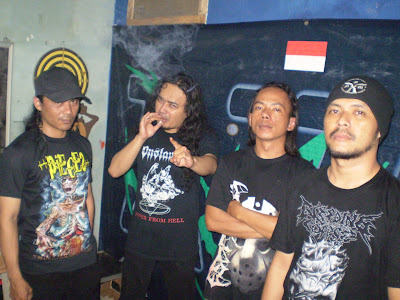