Kieran James: Hi, mate. Thanks very much for agree to do interview with our website Busuk Webzine. First we (me and John Yoedi) just interview death-metal bands but we want to move into black-metal. These are the questions:

KJ: First tell us the band history, like when you start and who are the members?

Ahab Desecrator of IMPISH: Hail Dr. Kieran, many thanks for the chance to interview us, I’m Abah Desecrator, guitarist of the band, joined IMPISH in mid 2011, after I quit HELLGODS. The band history so far begun in 1996 formed by Eno/Yono, AW and Deni, they chose the name IMPISH, because IMPISH is meant to be evil-ish and devil-ish [KJ: perfect name for BM band!]. But the band was put on hold in 2000, and resumed activity in 2011 when drummer Riyan Blasphemy decided to reunite with the band [along] with new members.
Now in IMPISH are:
Sigit Abaddon (vocal) (ex-HAZE)
Sabach Blashryk “Impisher” (guitar/bass) (ex-UNSEEN DARKNESS)
Abah “Desecrator” Supriyanto (guitar) (ex-CRUSADE, NEUROTIC OF GODS, HELLGODS, MAELSTROM)
Ari Bathory (ex-HELLGODS)
Rian Yans Blasphemy (drums) (ex-BETON, BLACKJACK)
Our Current Discography so far:
“The Shadows in the Fullmoon” Single 1999 (featured on Blacker than Darkness Vol.2 compilation)
Thy Wrath of Fire EP 2011
“Gerbang Kehancuran” Single 2011
Pesta Rakyat Hitam Kegelapan Split 2011
The Myst EP 2011
IMPISH is featured on compilations:
- Blacker than Darkness Vol.2
- Evilil Demiom pt.2 - Asian Black Metal compilation
- And Metal for All
- Underlist pt.3
- Lintas Hitam pt.1
- Sajajar Sa perjuangan

KJ: How is progress for your full-length album?

Abah: Currently we’re working on [our] first album, still un-named, and we are in progress to finish some lyrics and musical compositions. Our new songs [are] totally different from our previous songs like “Gerbang Kehancuran” and “Legion ov Kvlt” [with] more direct approach [for] song structure, [as we are] influenced by MARDUK (old) and BELPHEGOR. But the lyrics contain internal spiritual war and tell about humanity questioning the existence of God and war against spiritual life beneath. For example [the] song “The Night of Dark Ravenous Heart” tells about evil which dwells within every man and so on...

KJ: How to describe your style and what bands do you like?

Abah: Our style named Warkvlt Black Metal, We named it because Warkvlt means our themes basically [which are] all about War, internal spiritual war, and ancient war as told by “Legion ov Kvlt” lyrics. “Kvlt” because we want to give the other side of black metal. As you know in Indonesia many black-metal musicians and fans only know just two bands as their main influences: DIMMU BORGIR and CRADLE OF FILTH. Once in the black-metal festival we did the show in early December, 15 of 20 bands [are] DIMMU and CRADLE based...what a boring situation!! So musically our main influences now [are] MARDUK and BELPHEGOR, but we want to make our music more direct and simple like ULVER did in Natten Madrigal album.

KJ: Do you believe in the black-metal ideology?

Abah: Black metal ideology for me as a musician is a rebellious expression against so-called trendism in metal music. I admit two [of] our EPs were recorded [with] very bad sound quality just to express "here’s the black metal spirit" as in MAYHEM – Deathcrush (No Core -No Care -No Mosh -No Trends) and DARKTHRONE – A Blaze ... simple songwriting, kvlt sound and sometime people just don’t get it what is black-metal.

For me black-metal is just another expression for what Euronymous did in Deathcrush and none of Norwegian Inner Circle is a Satanist, this is what Varg [Vikernes] said in Until The Light Takes Us, and many liner notes on Lord of Chaos book.

KJ: What are your favourite Indonesian black-metal bands?

KJ: What is the metal scene like in your city including black-metal, death-metal, etc?

Abah: In general [the] metal scene in Bandung is quite good, so many people are into metal, and it [has] become [a] lifestyle wearing metal shirts, and the accessories. [It is] hard to say but in Bandung [it] seems to me [that] black-metal is not accepted as [widely] as death-metal, not as sell out as death-metal because not many people are into black-metal. So it [suffers from] lack of exposure and lack of chances for playing in gigs/shows. I was in HELLGODS, one of best Indonesian black-metal bands. In one year you can count on just one gig played in Bandung, maximum just two shows, you can compare to many death-metal bands. In one year they can play many shows in Bandung.

For us it doesn’t matter but bands are not noted they played in some gigs, but [it is] in their discography, so our aim and focus is to complete our debut album right now. 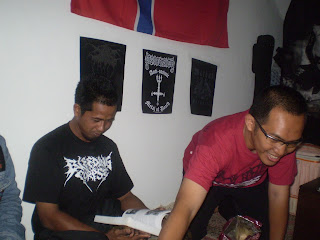 KJ: It was http://www.metal-archives.com/ that allowed me first to know about JASAD and other Indo metal. Did you anyone from overseas contact you through your band page there?

KJ:  What are your plans and goals for the band?

KJ: What city in Indo do you think has the best black-metal scene and why?

Abah: Surabaya is the most notorious black-metal scene in Indonesia, many great bands [are] there named DRY, PEJAH, and THIRSTY BLOOD and also many great fans. The growth and movement of the black-metal scene there [is] supported by many regular shows, organized by event organizers that have open minds like Trendy Bangsat, Under Terror and so on. So many black-metal bands gained [deep] respect there; it’s different [from] Bandung because we don’t gain much respect and attention from local event organizers because of the slogan: “Black-metal has no crowd”. Bogor also is a good city for black-metal, but sadly black-metal and metal scene movement here is supported by someone who wants to be Mayor.

KJ: What is your comment about TANAH KUBUR from Cibinong? We interview the singer of that band here too.

Abah: Oh I know Jamet [TANAH KUBUR], I do have [deep] respect [for] him, one of [the] nice people in black-metal scene and he’s a talented vocalist.

KJ: Last one: Any message or word for your fans?

KJ: Thanks very much for the interview and I hope to meet you next time I go to Java.

KJ note: Abah also gave me recommendations for the following Indo black-metal bands: "FALLENLIGHT is one of OSBM band (old-school black-metal)...their influence is mainly DARKTHRONE based, like BVRTAN. NOSFERATU is influenced by LIMBONIC ART". 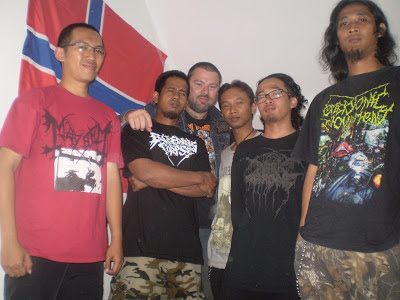