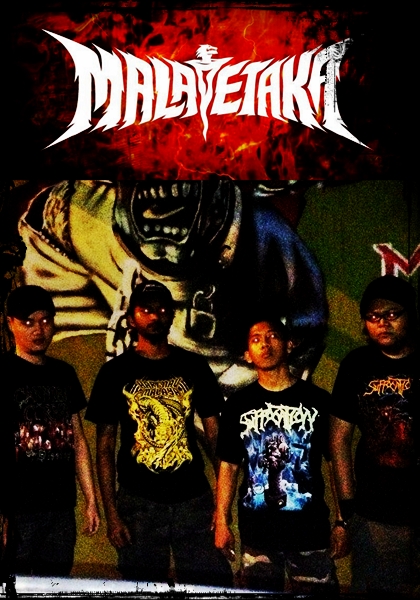 Introduction by John Yoedi: MALAPETAKA band from Kuala Lumpur – Malaysia formed in late 2009 and they’re playing Death / Thrash Metal. The word of Mala-Pe-Ta-Ka…literally means disaster. Its origin from Sanskrit pronounced as Maha-Pataka…defines it as ‘the resultant actions of greatly sinful activities’. They are usually practice and covered some old school songs from bands such as Slayer, Metallica, Iron Maiden, Kreator, Terrorizer and Napalm Death.

After two years of jamming and practicing cover songs, they finally decided to come up with their own materials. And by January 2013 a 3 song demo was recorded. During that time as well, MALAPETAKA was invited to perform for their very first time in front of a crowd at a local gig in Ampang, KL. They played 4 new songs (3 of them taken from the Demo) and 2 cover song from Kreator and Cannibal Corpse. MALAPETAKA is currently working hard on more epically destructive and aggressive songs to complete a demo by mind 2013. The band is also looking forward to play more venues and seek opportunities to advance further in this path.

Here is our interview with Ashok ‘Guitarist’ of MALAPETAKA….Let’s read it now…

John Yoedi: Hi Ashok…how are you there ? Pleased talking to you and thanks for your kind support to Busuk Webzine. Kieran James (Australia) and I share for this blog. So how are things going at the moment for MALAPETAKA?

Ashok: Hi John, pleasure to be talking to you too. Welcome, and thanks for interviewing us. Currently, we are working hard and at the same time, teaching our new drummer our songs. Haha. Just recently our former drummer left the band due to his other commitments. So the new drummer, Naji filled in. Everything’s going well so far for Malapetaka. Hoping to release our demo in the shortest time.

JY: Firstly….Would you like to tell us a briefly about How did the band get together and what made you initially form the band? 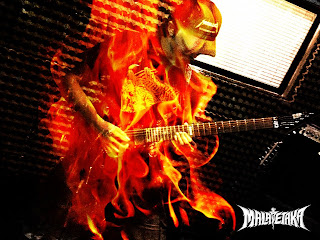 Ashok: The band started with just 2 guys, Me and Abu, the former rhythm guitarist. Soon after, we were joined by Boon on vocal, Alias on bass, and Azmer on drums. We played a lot of cover songs for the passion. Before we could make our own material, Abu left due to his own personal issues. But we stayed strong, we continue to experiment and train, before we know it, we have a bunch of our own materials coming up.  Currently only 4 songs are finalized.

JY: Who’s the current line up of the band? And anything they did before joining in MALAPETAKA?

Ashok: Current line up are me, Ashok as guitarist/composer, Boon as vocalist/lyricist, Alias as bassist, and our newest member, Naji as drummer. All of us are quite new to band, so Malapetaka is our first band. Although Naji used to be in a horror punk band as a drummer.

JY: Your band formed in late 2009 and the band playing death/thrash metal. Who had the idea to play a style of music like this?

Ashok: Well, almost all of us are into black metal, thrash metal, death metal, 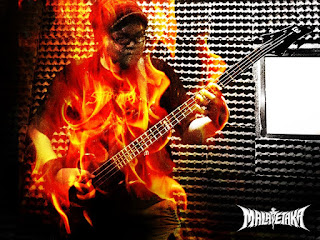 technical death metal, progressive death metal and the list goes on. However, death thrash stands out the most to us, as we discovered while we started to first play cover songs. The aggressiveness of Thrash, and the brutality of Death metal is something we can all agree on. Thus, Death Thrash Metal became our choice. But we are also incorporating Nusantara elements in our Death Thrash.

JY: And how would you describe MALAPETAKA in musical output? Where do you get your inspiration musical and lyrical form?

Ashok: Musically, Malapetaka is all about aggresiveness, brutality, while on the same time, We incorporate Traditional Javanese/Nusantara elements in our music. Lyrically, the inspiration came from all around us. The fascination and hatred towards human’s hypocrisy, pretentiousness, greed, and so on. All in all, Malapetaka is very much about death, life, human’s action or inaction that leads to a certain calamity.

JY  Do you think lyrics are serious element of music? Because having vocals with no words that no one can understand? 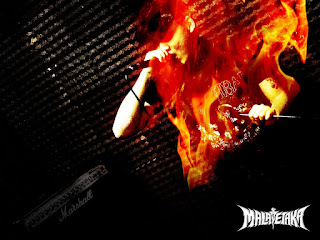 Ashok: Yes. As a matter of fact, Boon our vocalist is experimenting with all sorts of vocal styles. Although the words may be hard to understand on one listen, but he tried to keep it balanced. There won’t be any clean singing but you can still catch a few words the more you listen to it because every words in the lyrics is growled / screamed out accordingly to the song.

JY: 3 Songs promo has released in January 2013. How has the reactions been so far? And was it self released or?

Ashok: The reactions was pretty good. Although we ourselves weren’t quite satisfied with the outcome. That was our first shot at recording at a studio and definitely self released. And that is why we are coming up with our demo album.

JY: And tell us a bit about the recording process for the promo album? How long did the process take ? And did everything go to plan?

Ashok: It wasn’t much of an album, it was only released on our reverbnation and facebook page. Free for download. Just to get people to hear who we are. The planning took around few months, while the actual execution took about 1 week. Done in a local studio. Not everything went as planned as it was our very first attempt. But we do learned a lot from our mistakes.

JY: And how many promo/demo album coming out since MALAPETAKA formed? 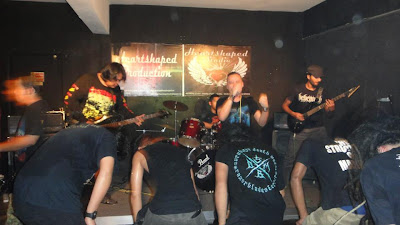 Ashok: There was only 1 so far. The 3 song promo. Coming up is our demo. Refined 3 songs from the promo and added 2 more new songs.

JY: The inspirations are clearly many, but could you say something about which bands had and still have an impact on the music that MALAPETAKA make?

Ashok: The band Death is clearly a big inspiration. Musically Death is a prodigy in death metal. Not to mention the birth of death metal and countless bands they influenced all across the globe. Musically, all their songs from all their album are very inspirational. The aggressiveness, the melodic, the brutality, the inspiration.

JY: And who was usually responsible for writing lyrics and music concept for MALAPETAKA?

Ashok: Lyrics are written by Boon, our vocalist. We gave him total freedom in creating lyrics. And he’s inspired heavily by satanism, humanity, and death. Haha. Music concept would be me, I explored a lot of traditional Javanese/Nusantara tunes to get inspiration.

JY: What is the current situation of real metal in Kuala Lumpur - Malaysia? Are there any less well known Kuala Lumpur- Malaysia bands that you would recommend? 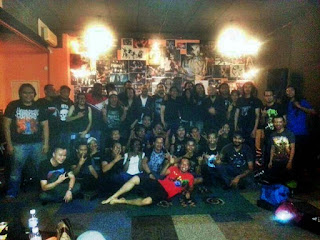 Ashok: Sad to say, too many bands are still very young in their choice of genre. There is no doubt in their skills. But genre wise, its just too pandering to the trend. Its hard to find bands that are sincere in creating metal that are not conforming to the current trend. But the real metal bands are still fighting the good fight. There is one underrated band, a friend’s band, Infiniterror…playing thrash metal. Infuenced by a lot of technical thrash metal. You can totally check them out. They haven’t released any proper material, but if you were to see them play live, which we did when we shared a stage with them, you can see the dedication they have for thrash metal. Also check out Humiliation, Scent of Carnage, Blood Legion, Lavatory, Crown ov Horns for a good dose of metal. 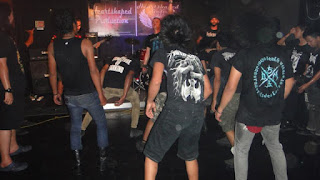 JY: Did you play lots of gigs there? Where was good and worst gigs?

Ashok: Currently we have only played one gig live. We are looking forward to play more. We have been to numerous gigs locally, and I am glad to say they are all pretty good.

JY: Just as a side question, What do you think about Busuk Webzine? In Busuk Webzine, we try to use two languages: English Language and Indonesian Language… and also try to update news everyday.

Ashok: That’s great, likewise we also feel the importance to connect to the audience through the use of Malay and English.

JY: Did you know about Death Metal Bands from Indonesia? And what do you think about them?

Ashok: Excellent from what I’ve seen so far, been to Hammersonic in 2012 and 2013 and subsequently, I’ve grown to like more Indonesian metal like Siksakubur, Deadsquad, Kekal, Engorging, Revenge, Forgotten, Dead Vertical just to name a few. The metalheads over there are also phenomenal and always supportive which is also great for the scene to grow.

JY: When do you expect to have the album recorded, mixed, mastered and ready for release?

Ashok: Our demo was delayed due to the departure of our drummer, but with Naji having to to do a bit of a catch up, we are looking to enter studio by end of June latest. Should be ready early July, fingerscrossed.

JY: On the final notes….What are you hopes for the first full length album then?

Ashok: Well there is no plans for a full length yet, but myself I’m already composing and making more songs in case the right opportunity comes knocking.

JY: Thank you very much for taking the time to answer my questions. Good luck for MALAPETAKA. Anything you wish to add to conclude this interview?

Ashok: Do check out our FB page: www.facebook.com/malapetaka.kl for more updates on our demo. You could also reserve a copy for free, just send us your details at malapetaka.kl@gmail.com

Ashok: Thank you guys for doing this interview and bro John Yoedi, hope your treatments are going well and on the road to recovery. Stay strong brother \m/… (John: Thanks a lot bro)

[Interviewed by John Yoedi, 6 June 2013.]
Here are some links if you want to know more about this band :
http://www.facebook.com/malapetaka.kl?fref=ts
www.reverbnation.com/malapetakaofficial