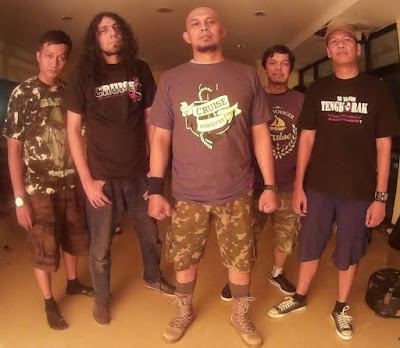 Kieran James aka Jack Frost1: Hi, could you please explain the history of your band?

Ombat TENGKORAK: Tengkorak was actually established in 1991. We were named Skull. We started to use ‘Tengkorak’ as our band name in 1993. For further details, you guys could read on sources on the internet or Wikipedia.

KJ 2: How was the people responded to your demo/mini album/ or your albums?

Ombat2: Well, it was positive so far.

KJ 3: Which bands influenced you the most?

Ombat3: Initially, we were very influenced with Napalm Death. But recently, we were absolutely had defined our own concept.

KJ 4: What’s your future plan with the band?

KJ5: Does your song using both English and bahasa Indonesia?

KJ 6: What stories would like to tell in your lyrics?


Ombat6: Heterogeneous… It’s mainly the reflection of several information (or news?) at the specific time.

KJ 8: When was exactly you guys are being metal fans?

KJ9: What would you say to the people who asked why do you play western style music?

Ombat9: Almost all of the popular music in Indonesia came from the West. It's not only metal but also pop. But it doesn’t mean that we should take for granted. It was also other factors such as the media, which often emphasized the information (or trends?) from the West. Basically, we just want to play the music that we like. It was by chance that grindcore is coming from the West. Although, for example, if it came from Zimbabwe it is still not a problem for us.

KJ 10: Does your wife or girlfriend support you?

Ombat10: They are basically supportive as long as we are doing positive things.

KJ 11: Is there any good side or bad side in regards to the communities in your city?

Ombat11: They all have the good and bad sides. But we have to learn from the past or the (bad things) will occur repetitively through the generations.

KJ 12: What is your future plan with the band?

KJ 13: What is your most memorable gig?

Ombat13: It was Jakcloth in 2010 because it was the moment when our band declared a new concept that is being positive, keep educating both for ourselves and everybody else.

KJ 14: Anything you want to say to your friends?

Ombat14: Keep being positive and istiqomah (being good in religious way).

Ombat15: NO! We do not know what White Metal is.

Ombat16: Yes, it does. It is even got many followers and being more solid. Also, they are also Istiqomah [smile emoticon] (being good in religious way).

Band Contact:
https://www.facebook.com/TENGKORAKGRIND/?fref=ts
[Translation from Bahasa Indonesian by Ms. Okky from Glasgow University, Glasgow, Scotland, UK.]
You can also read our interviews with TENGKORAK (Samier), KODUSA (Jakarta), and G.A.S. (Surabaya) on this website. 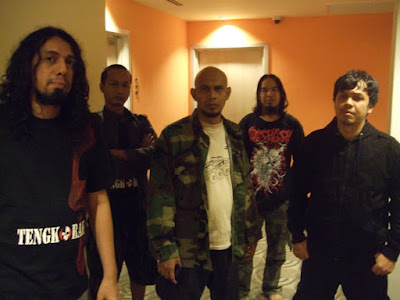