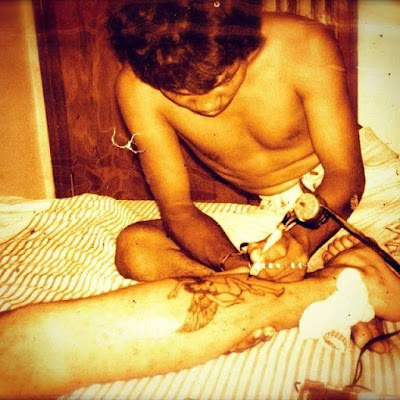 YOU ARE A FUNNY *KENT*! By Jason Xenophobic

(*KENT is an Australian slang word used in replacement of the more crude word “cunt”. The word kent is often used among friends as a very Australian term of endearment, but also can be used as a most severe insult. The literal meaning of the word cunt refers to the female genitalia.) 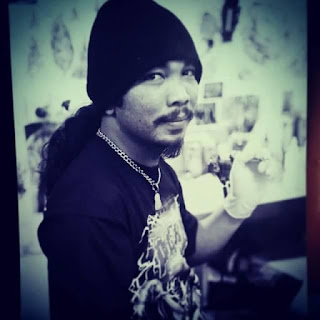 You are a funny kent mate! So much so that I have to have a little chuckle. But honestly, I have to ask, who the fuck do you think you are? I have reminded you on numerous occasions not to shoot yourself in the foot when you are feeling as high as the moon - a superstar in your own head! Yes, that’s right, in YOUR OWN head! Sorry, please excuse me, I have to stop again to laugh at you.

So you’re only bringing a knife to a gun fight? I’m feeling like we’re in a spaghetti western here, and unfortunately you ain’t no Clint Eastwood. You’re just another bitch ass who happens to play guitar, coasting on your fame from SIKSAKUBUR! Without that mate, you are a nobody - a no-name face in the crowd.

As a personality within the music industry it is the public’s right, and my right, to critique your music abilities and accomplishments as a band. The same way that people critique art, drama and all the performing and creative arts. It is your responsibility as musician to take criticisms on the chin and either ignore them, or use them to better yourself as an artist. But you, however, not only winged like a little bitch, but you also crossed the line and made it personal. Trying to use tattooing against me? You don’t know shit! As far as I know - and it is something that I do have considerable knowledge about - I was the first Indonesian person to be awarded a certificate from the PTAA (Professional Tattoo Association of Australia) - as I was informed personally by the association - and have also received qualifications from Queensland University Australia, as well as certificates from the New South Wales Victoria and Western Australian of health departments . For a Batak boy from a small village in North Sumatra I consider this to be quite an accomplishment. Aside from these personal achievements I have also dedicated my time to helping my fellow Indonesia tattooists, including my sponsorship of Master Gede Supala Shotonk (who at the time was President of BTAC) to attend the Melbourne Tattoo festival. It was from this venture that Shotonk took the knowledge of infection control and hygienic standards to help progress the Indonesian tattoo industry in order to meet contemporary international tattoo practice standards. Furthermore, I was the first Indonesian person who was able to open my own tattoo studio in Australia despite frequent threats to my life because that’s just how the industry is over here! Well, that’s enough bragging about myself I should think - but remember this, I’ve been doing this shit for 3 decades so you got a long way to go boy before you can even think about throwing your insults at me.

So this is where I am quite amused! You think you can turn me against my fellow tattoo artists? Well, sorry kent, but I’m not like you, so quick to turn your back on those who were once your mates and fellow musicians - the ones who made you who you claim to be today! You have proven once that you don’t have the nerve to be upfront and honest with people, to deal with situations like a man, but rather you have shown the world how deceitful you are - bitching to the media about how “hard done by” you have been and attacking people on a personal level, just like what you are trying to do now.

And it’s a funny thing - I don’t have that jealous streak that your small, narrow mind is imagining I have. I applaud the people in my industry who stand out, who succeed, and who are talented at what they do - I don’t have what they call in Australia the ‘tall poppy syndrome” (you think you can converse in English, then look that phrase up so you don’t get offended the next time someone uses a common saying when communicating with you). I worship the Indonesian tattoo artists in Indonesia so much so that secretly I created the media site INDONESIAN TATTOO ART AND RITUAL WORLDWIDE in order to promote and celebrate the Indonesian artists and encourage the world to take notice of the unique talent that Indonesia has to offer. This is a representation of my pride and respect for my fellow artists, as opposed to me being bitter and spiteful such as yourself.

So again I must ask, who the fuck do you think you are? Yes, I critiqued the integrity and the musical ability of your band. Yes I questioned the appropriateness of the accolades been awarded Hellcrust by Hammersonic as I justifiably believe that such praise is undue. Album of the Year? Kalamaut has been out for a mere 3 months so forgive me for assuming this to be a extremely biased publicity stunt pulled by Hammersonic in order to serve their own interests as opposed to being an objective decision based purely on the merits of the album and a reflection of the people’s choice (but please don’t interpret this as my way to attack Hammersonic, as admittedly I believe they have done a good job for the last couple of years despite all the surrounding drama). This work of yours, in my humble opinion, is average and underserving of the hype that you have tried to create. The drama surrounding it is just that - drama! It is a gross over dramatisation which disappointed on every level. But hey, that’s just my opinion. What do I know? When there are so many Indonesian bands that eat, breathe and shit metal I know I am justified in criticising an industry that is so obviously favouring the very small minority - whether they have talent or not - at the expense of and to the detriment of the whole metal scene.

So if you want to be a rockstar mate - with your custom guitars (which you still cannot use to create any memorable piece of music) and “friends” in high places - then how about you try growing a pair and harden the fuck up! This is my last word on the matter, I will provide no further comment [by Jason Xenophobic and used here with his kind permission, 22/4/2016].


2 At the  Step Inn Pub (Brisbane, Australia) after the DEATH VOMIT (DEVO) show and feeling accomplished. Jason made a small personal contribution to the Indonesian death metal scene by organize and managing DEATH VOMIT touring Australia wide (No sponsor and no shit) (September 2010).
3 With Ebenz of Burgerkill at Black Betty Night Club from THE INVASION OF NOISE #1 making a history and contribution to Indonesian Metal Community by BURGERKILL, the 1st band from the 3rd world playing legit in Indonesia, self organized, self funded with no cigarette company or beer company as sponsor.
4. THE FAMILY 2015 Jason B day.
5 Jason (centre) with the two legendary Balinese tattoo masters and mentors MR AGUNG JAMRUT (L) and MR BLOCH (R). They are two of the master tattooists from the old guard c1990s reunited after 17 years. 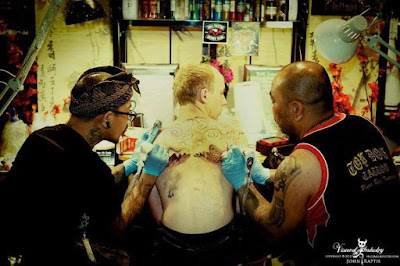 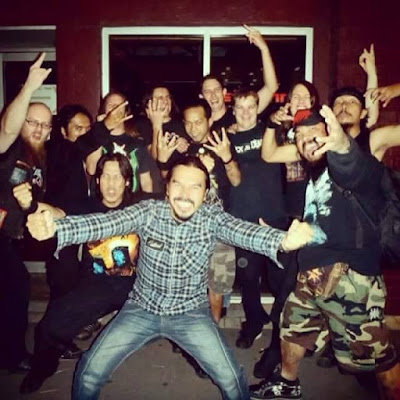 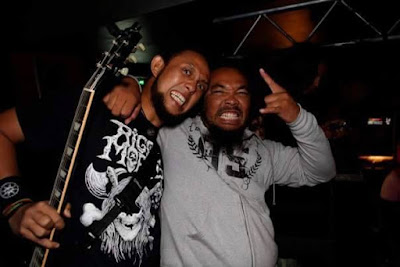 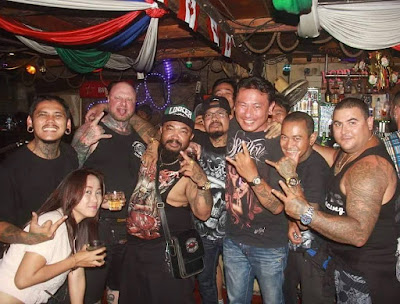 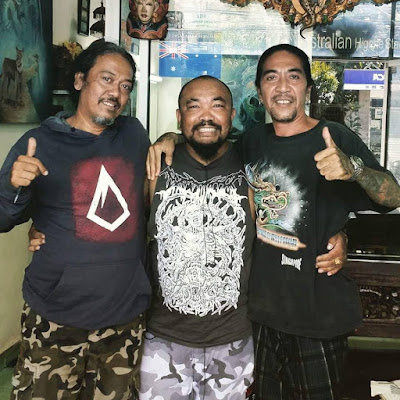