Kieran James (Busuk Chronicles): Why did Daniel join the band in 2012?

Ari Bejo (drummer, BLEEDING CORPSE): Daniel joined because Bleeding Corpse tried to make the new concept with two guitarists. However, he did not fit into the style of play of Bleeding Corpse.

Ari: Bobby left not because of Daniel but because he had other activities planned.

KJ: Did you record some songs with Bobby for the second album Condemned to Suffer?

Ari: We did not record any songs with Bobby’s vocals, only instrumental versions (unreleased demos).

KJ: Did Bobby write any lyrics for the album?

KJ: Cannibal Corpse had a song “Condemned to Suffer”, were you influenced by that song?

Yadi Behom (vocalist, BLEEDING CORPSE): No, they are very different.

KJ: Obscure Musick USA wanted to release your second album but now we hear this will not take place, what happened?

Behom: We had a miscommunication with Corey [Athos]. There was a misunderstanding with Corey. CTS was issued first by Atik from Groupies Merch. Corey and Atik (the album producer) had a disagreement. Now Obscure will not reissue the album due to the disagreement with Atik.

KJ: What was the disagreement about?

Behom: We think it is better to be issued by a local label. It depends on Atik whether the album will be reissued or not. Corey had a concept and Atik had a different concept.

KJ: Is it a good idea to get a reissue by an overseas label?

Teguh: It is not cheap to reissue; it is quite expensive to do a good job of it and sometimes the label can’t afford that. The exchange rate – rupiah to US dollar – makes it expensive for us.

KJ: Are you happy with Groupies Merch?

Behom: We are quite happy with Groupies because Bleeding Corpse wants to just keep making music. Groupies Merch can accommodate that.

KJ: Why did you choose Groupies Merch and not Extreme Souls Production (ESP) in the beginning?

Teguh: Tell us about the recording process.

KJ: How many copies did the CD sell compared to the first album?

KJ: How about the cassette release for the second album?

Ari: It was released by Bomet Records; 500 copies sold out in two weeks.

KJ: Why does Bleeding Corpse have fewer shows these days than before? Is it because Luk Luk is now very busy with Kaluman?

Teguh: Tell us about the album concept.

Behom: The first concept of the lyrical style was helped by Andri Gila. I did not initially feel familiar with gore-style lyrics. I am also in Rottenatomy band which has social and political type lyrics.

Teguh: What is happening with Rottenatomy?

Behom: The guitar player studies in the school in Germany and we have no drummer now. The band still exists but it is not active. We are waiting for a new drummer who can suit the Rottenatomy style.

KJ: Why do you not write social and political lyrics for Bleeding Corpse?

Behom: No, they do not match the image of Bleeding Corpse.

Ari: About Condemned to Suffer, it is not the same as the first album because we focused more on the harmonies. It feels darker than the first album. We are trying to grow up in our music and experiment. There is a lot of crossing technique.

KJ: Did Daniel play on the second album?

Ari: No, he had already left. All of the arrangements were made by Uus and Luk Luk.

KJ: What was the reaction of the fans to the second album?

Ari: The fans’ reaction was very positive. You can see that from the selling out of the album within one month. 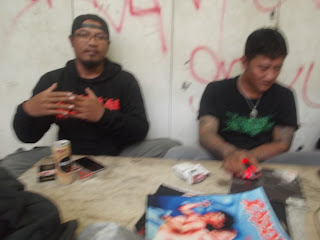 KJ: What are the next plans for the band?

Ari: We plan to make an EP next and a music video for a song taken from the CTS album. The song will be “Konspirasi Ajal”. We don’t have any label yet for the EP. We will start to make the material in August 2016.

Uus: I hope that Bleeding Corpse will continue to progress into the future. I hope that I can play in Europe.

Ari: After the EP will start preparing the third album. The reason why we want to make an EP first is that we want to introduce the new concepts and the new songs. The third album will be different from the CTS album; we will change all the guitar effects. We already have the concept for the EP.

Uus: We will stay in the DM roots but with more complex riffing patterns.

KJ: Do you still play songs from the first album Resurrection of Murder at live shows?

Ari: We still play two or three songs from the first album.

KJ: Is there enough money earned from the band activities to support your living?

Ari: We get money from the music but it is not enough for our living. I have a shop [SERAK store, Jalan Cihampelas, about 50 metres from the KFC but on other side of the road] and so does Uus. Behom has an online shop.

Uus: Can you please pray for me to get girlfriend or wife? I hope some girl will read this interview and get interested! I definitely want to get married.

KJ: Do you prefer metal chick or religious girl?

Uus: I prefer metal chick but actually I don’t mind.

Uus: No, because I am already in too many bands.

Behom: Just wait for our next release.

Uus: Keep up playing your music.

Ari: Just wait for our next release.


Uus: Don’t follow only the fashions, f*** posers. Buy the CDs, get the soul from the songs! 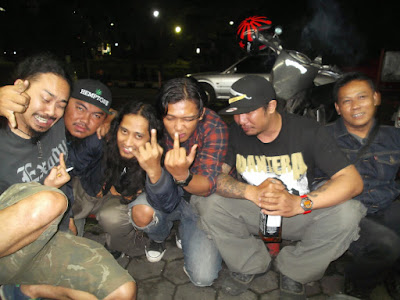 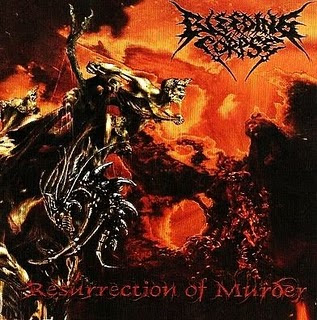 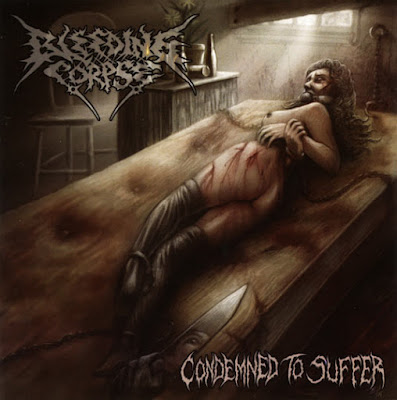