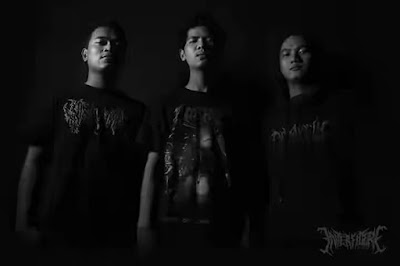 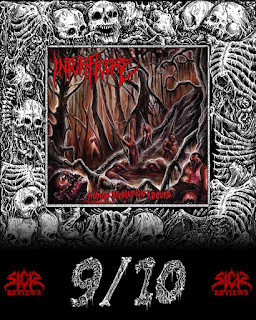 Bekasi water is for sure contaminated by some chemicals making the population completely f***ing insane by wishing to annihilate everything in their f***ing way and this time another group of people are marking Indonesia by their cruelty and extreme f***ing violence by creating a serie of cannibalistic f***ing orgies under the gory name of "Human Revolution Absurd"! This gang of bloodthirsty f***ing monsters is called "Interficere" and run into the streets to perpetrate 5 bloody f***ing crimes including an introduction to the macabre journey of these brutal f***ing souls by sharing four scenes of an unnamed turmoil being extremely f***ing brutal and successful but maybe having a few rare parts a little less interesting! This insane Brutal F***ing Death is created by Ahmad Supandi (Vocals); Arip Sopiyan (Guitars/Bass); Hunter Panjaitan (Drums) and the trio is giving an amazing f***ing composition for the creepy gore scenes by adding some catchy f***ing parts, maybe not enough to do a total addictive work but still delivering some insane and brilliant f***ing material! Interficere really managed to give an oppressive and butchering f***ing atmosphere to their first EP increasing of course the quality but also the level of enjoyment of this putrid f***ing shit! Ahmad is giving a powerful and sick f***ing guttural perhaps a little redundant after a while but doing such a great f***ing job, Arip is performing almost only awesome f***ing riffing having some rare a little les enjoyable but able to write some chaotic brutal f***ing shit and finally, Hunter is insane as f*** with a non stop blasting f***ing drumming and having of course some diversity by the musical direction! The production is very good and f***ing heavy with an excellent mixing, not perfect but helping this murderous act of total f***ing debauchery to sound like a ton of shitty guts launched on the f***ing floor! "Human Revolution Absurd" is not perfect but able to give us some brutal twisted f***ing moment by the quality of brutality emerging from these 16 f***ing minutes of pure f***ing insanity! Interficere managed their debut into this shitty f***ing world of sickness by giving a great f***ing work being still not totally perfect but mandatory to all insane sickos around! Excellent Perverted F***ing Scenes of Pure Gore F***ing Debauchery! 9/10. [This review was first published by Andrew Sick of Sick Reviews and is used here with his kind permission.] 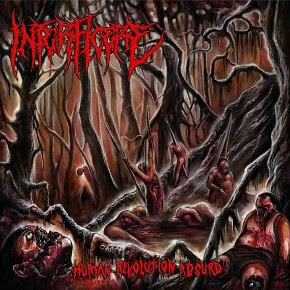