Teguh Prasetyo: Why did you pick the band name?
Asht: The real founder of the band is the drummer; it is taken from Ashtaroth, the goddess of war and fertility (from Egypt). We just added “um” behind it to make the differentiation. The original drummer was Arie, he left in 1999. The band was formed in 1996.
Teguh: Please continue with the band history.
Asht: In the second formation, the vocalist was Abang. First formation: Arie-Agus-Yogi-Ogi; second formation: Arie-Asht-Indra (RIP)-Abang. This line-up also joined the Blacker than Darkness Number 1 compilation, 1998, self-titled song. The song is telling the story about the goddess. We already made songs for the album in 1999, but I was getting married at that time. Because of this the band stopped.
After 17 years (until 2015), I started the band again. I asked the permission from the older members to rebuild the band. They didn’t want to reform but they gave me the permission to start again and recruit the new members. So, basically, we had a member change. It was a tough decision to change the members.
We made some songs but they were not yet released in a physical form due to changes in the formation. The songs were written by the new line-up. We had a responsibility to explain the lyrics’ concept. It is not easy to make BM music.
So, after changing a lot, I feel that this line-up really has good chemistry between the players. It is easy for us to make the songs in a short time. Kenzy joined after our first Facebook interview [band interview with Busuk Chronicles]. The new members gave us the new spirit to make a song as the members all support each other. 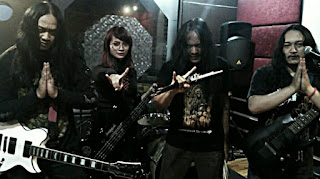 Kieran James: How do you find Kenzy?
Kenny (Kenzy): Accidentally.
Asht: Kenzy also had a band before. A friend of hers contacted me and we were just chatting. It came to my mind that I needed a bass player so I asked Kenzy. But she refused to join at first.
Kenny: I was really busy with work as I had double jobs. I was also going to college. I am also a wantai instructor (kick-boxing).
Teguh: She really kicks hard. You should see her video – it is really frightening.
Kenny: I have a daughter in junior high-school. … I stopped playing in my band about 16 years ago, about the time when Asht band stopped. I would play with any band which asked me to help – such as punk or hardcore or dangdut.
Teguh: Not to be sexist but usually when a band gets a woman for a band the woman is no good. But when I saw her band play I saw that she was really good. I was playing with […] and we were playing together on the same stage.

Teguh: With this formation you made some songs. What are the names of the songs?
Asht: We have made five songs. We have written five songs but we have only recorded three. We recorded at the home studio of [ …  ], the guitarist of Sethos.
KJ: What do you think of Sethos?
Asht: Sethos has an epic song. I like Sethos personally.

Teguh: What are the titles of the songs? How many songs uploaded on social media? Asht: The titles are: (1) Circle of Death; (2) Beyond the Sanctification; and (3) Into the Land of Nineveh.
Teguh: Is there any planning to be released by yourself or your logo?
Asht: We want to promote the single first before the full-length album. We will release it by ourselves although we would accept a record label release if the label has the same vision as the band. Nowadays a lot of BM bands make an album; it is like a trigger for our band. But it is also a coincidence. 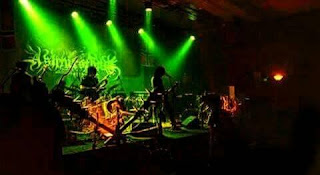 KJ: Tell us about the show you played at the university. Asht: Because we had a friend who is still in the university, we became partners in some gigs. That university wanted to have a music show so the friend contacted Asht to play. At first I didn’t think BM could be able to play in the university. It is a musical university, STIMB (School of Musician Bandung).
KJ: How was the experience?
Asht: We were surprised because we had a positive reaction from the crowd. The teacher also appreciated Ashtarothum. The teacher said that the band can be invited back to any future musical event at the university. He said it was weird but a fun experience. It was an experience and challenge for us to play at this gig. We were playing in front of music students. We didn't wear the corpse-paint. The time was not enough to set it up.

KJ: What do you think about Bandung Black Mass community?
Yaya (drummer): Black Mass is a good community for the BM movement and we were part of it before. Now we don’t join but we are still friends.
Teguh: Why don’t you join?
Yaya: The reason is because we want to start to focus on our own band. We want to stand on our own feet, become independent.
Asht: We support each other. 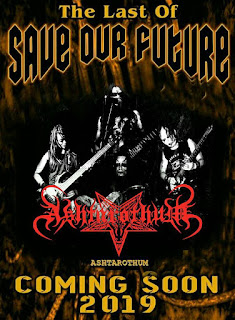 KJ: What do you think of Bandung Death Metal Syndicate?
Yaya: Very cool, amazing. At a personal level I can see that the BDMC people have a very clear vision and mission for what they are doing. The community made a lot of progress; they have brilliant ideas.
KJ: Favourite DM bands in Bandung?
Yaya: Forgotten, Disinfected, Gore Infamous.
Asht: Jasad too.
Jamie: Forgotten and Disinfected.
KJ: Black Metal in Indonesia, favourite bands?
Yaya: Pure Wrath from Bekasi, Choria (Jakarta), Vallendusk (Jakarta), Misanthropic Imperium (East Java), Dry (Surabaya), Nether Band.

Teguh: Kenny, how do you feel to be in this man’s world?
Kenny: It is very normal for me. I live with a lot of family and man friends. I feel it is more comfortable to hang about with men, more natural, not so stiff.

KJ: What do you think about National Socialist Black Metal (NSBM)?
Yaya: It will not grow over here; because it will contradict with our country’s ideology and many people’s ideology. It is mostly about white superiority. Here we are a nation with a lot of culture and we exist in harmony for a long time. The issue does not match in our country in our opinion. If any band here calls themselves NSBM it will be a big trouble for them. We don’t know any band here using the NSBM label. The will of NSBM does not fit with our ideology and our culture.

KJ: What do you think of Singapore government banning Watain from playing in Singapore?
Yaya: We talk with guys from Singapore and they say the government does not give the permit for the show. It is like the government is watching us, to try to oppress the extreme-music community. Maybe that’s why Watain is not able to play, because they are a band which is open about rebellion. The government might think the band will trigger people to make chaos.

KJ: What do you think of Antifa stopping the Marduk shows?
Yaya: We don’t want to be involved in any political things; we only take the music. Indonesia is very different culture and ideology from the West so we don’t want to talk about it. BM is just an expression, to appreciate the desperation felt by a lot of men who live in the world.
Teguh: As in Malay NSBM, the anger is right; to try to fight it, but the anger should be directed at the right targets. 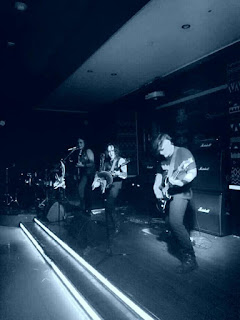 KJ: Was there any response to first interview with Busuk Chronicles?
Asht: Yes, we had response form a lot of people. Now a lot of people know a lot more about Ashtarothum.
Yaya: We should try to find our own ideology through the music as this will help to make us different.
Kenny: We want to make people to really understand what we say in the music.
Yaya: We think that nowadays people interact more with the song structure rather than with the ideology of the song.
Kenny: We try to make the songs and lyrics more detailed to make it more relevant with what is happening today.
Asht: Because we are not talking about bullshit.
Yaya: Nowadays we can’t just copy-paste from the internet; we must do real analysis and research. If people get inspiration they should talk to the person who made it. Now it is easy because of the internet.
Yaya: Because BM starts to grow again, we have a lot of discussion almost every day. We discuss issues from the past and present day issues. We can’t conclude anything as people have different opinions.
Asht: Another example: If you want to make music about the mountain, you should go to that mountain. You should write about what you experiences and what you know.

KJ: What do you think about the murder of Avaeejee in Thailand?
Yaya: It is the same stupidity, like trying to copy what happened with Euronymous. It is too stupid just to copy it. Not everything is real what people say or do. Some people take it too seriously.
Teguh: It is dangerous path; you need wisdom from the older generation. The older generation guide me and give me their point of view. Everybody who join this extreme music have radical tendencies inside themselves, they want to fight something. Even in reggae they have resistance.

KJ: Message for the fans?
Yaya: For the reader, become a smart person, and, to the BM musicians, keep on learning.
Asht: Indonesian people are all poseurs but being a poseur is good, because being a poseur is learning. We really need to learn from the history up until right now. In the end, we will become a good person because it is impossible to be true.
Jamie (guitarist): I hope that Ashtarothum band will be a power in the past, the present, and the future.
Kenny: I don’t understand the ideology of the music in depth but what is impactful for me is to feel the music. Don’t be a fanatic for one type of music. People who have art in them will not think like that.

KJ: What do you think of people who leave the community to focus on the religion?
Yaya: It is a personal choice because music and religion have their own rules. It is hard to be on two paths but it does not mean that musicians have no religion. It’s just a different point of view.
Asht: It is not a problem. It is a matter of option and choice. I can understand that if someone needs to learn more about their faith, of any faith, they must focus and leave something behind. In this case it is music.
Kenny: It’s not a problem as long as it can be better for themselves.
Jamie: It’s a personal choice. 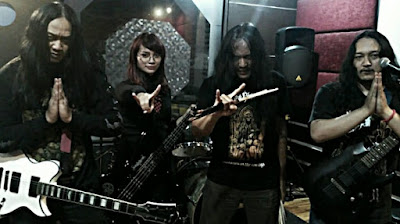 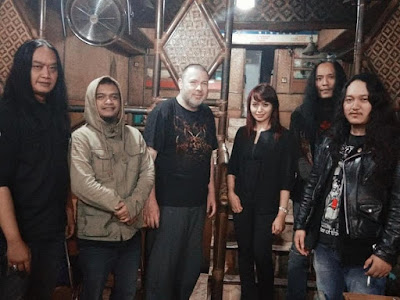 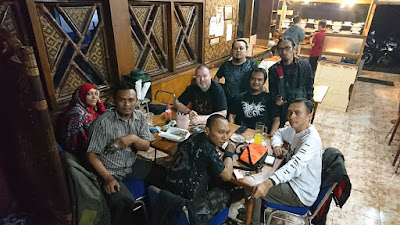 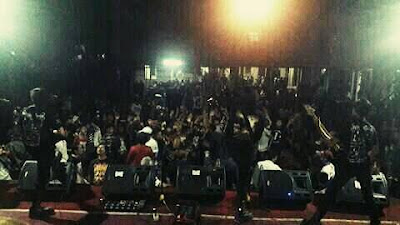 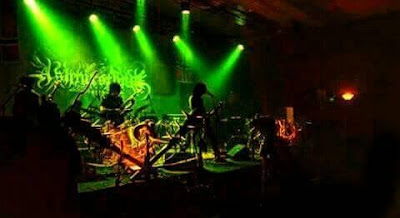 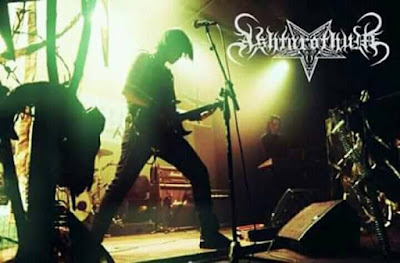